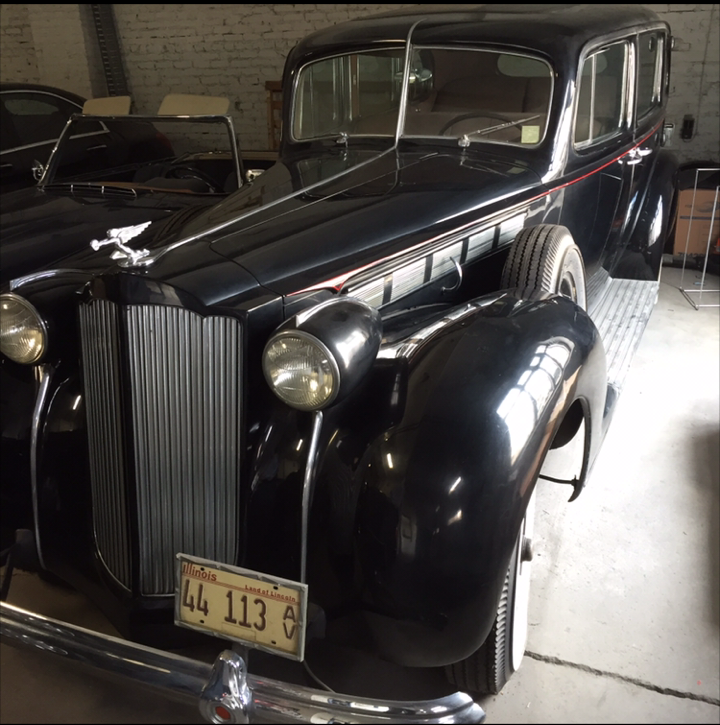 “Ask the man who owns one” – Packard sales moto

Thanks to a tip from a friend who frequently drops by CCC to talk cars, we unearthed this beautiful Packard from a home in the Edgewater neighborhood of Chicago.  The car sat in the corner of a dusty body shop for nearly twenty years before we were made aware of it.  We were blown away by the originality of the car, and especially by the fact that the motor still turned over.  The car was 99% original, still wearing it’s original black paint and broadcloth seats.

The car had originally been owned by a wealthy woman who had the jump seats removed, as she would not be driving the car, but rather, shuttled around by her chauffeur.  When she passed away, the car was given to a museum in Northern Ohio, where it sat on display from 1951-1963.  In 1963 the museum went belly-up, forcing them to liquidate their entire collection. As the Packard was heading to a local auction to be sold to the highest bidder, Charles Millner (Millner’s Cafeteria – Urbana, OH) literally chased the car down and bought it before it went across the auction block.  He paid $600 for the car, an all-original museum piece.  At the time, Charles had a large car collection, which, over time, was narrowed down to only 3 cars; a ‘35 Ford Phaeton, a Model-T Roadster, and this ‘38 Packard Super 8.

In 1998, Charles sold the car to a man named Wally in Chicago. Wally installed an electric fan and temperature gauge in the driver side glove box and parked the car, storing it in a garage here in Chicago for the better part of the last two decades, where we discovered it. Upon purchasing the car, we rolled it onto a flatbed and brought it to CCC, this being the first time the car had seen sunlight in nearly twenty years.  We poured some Marvin’s Mystery Oil in the cylinders and let the car sit overnight.  In the morning, we gave the car some fresh gas and fired it up.  Much to our surprise, the car’s straight-8 ran fairly well.  We have since gotten the car running and driving as it should, and take every opportunity we can to get the car out in the public eye.

*Many thanks to Dave Millner (son of Charles), for giving us such a neat history lesson on this stunning Packard.