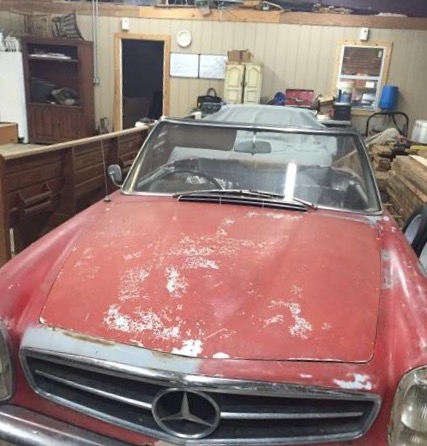 A few months back we received a call from a man who told us he had an “old Mercedes” tucked away in a storage unit in Mississippi.  Of course even with the as-vague-as-could-be description, we started getting excited about the possibilities of what the car could be.  The seller gave us a brief run-down of the car’s history; he had driven it while working on oil rigs in the 1980s, stationed in Mississippi.  When he was forced to relocate, the seller could not take the car with him and decided to hand it off to one of his engineers.  The car remained in Mississippi until we got the call and shipped it up to Chicago.

When we unloaded the SL from the trailer here at CCC, we wiped off the dust and got the car running.  It ran and drove just as it looked – in need of a little TLC.  The car was complete and appeared to be a perfect restoration candidate.  We were lucky enough to find a buyer in London who was on the hunt for a 250SL in this same spec to restore – perfect.   In only five days this Merc went from tucked away in a storage unit in Mississippi to a New Jersey port headed for London. Our friend in Mississippi was happy, we were happy, and the buyer in London was ecstatic to find such a rare-spec piece of Mercedes history.