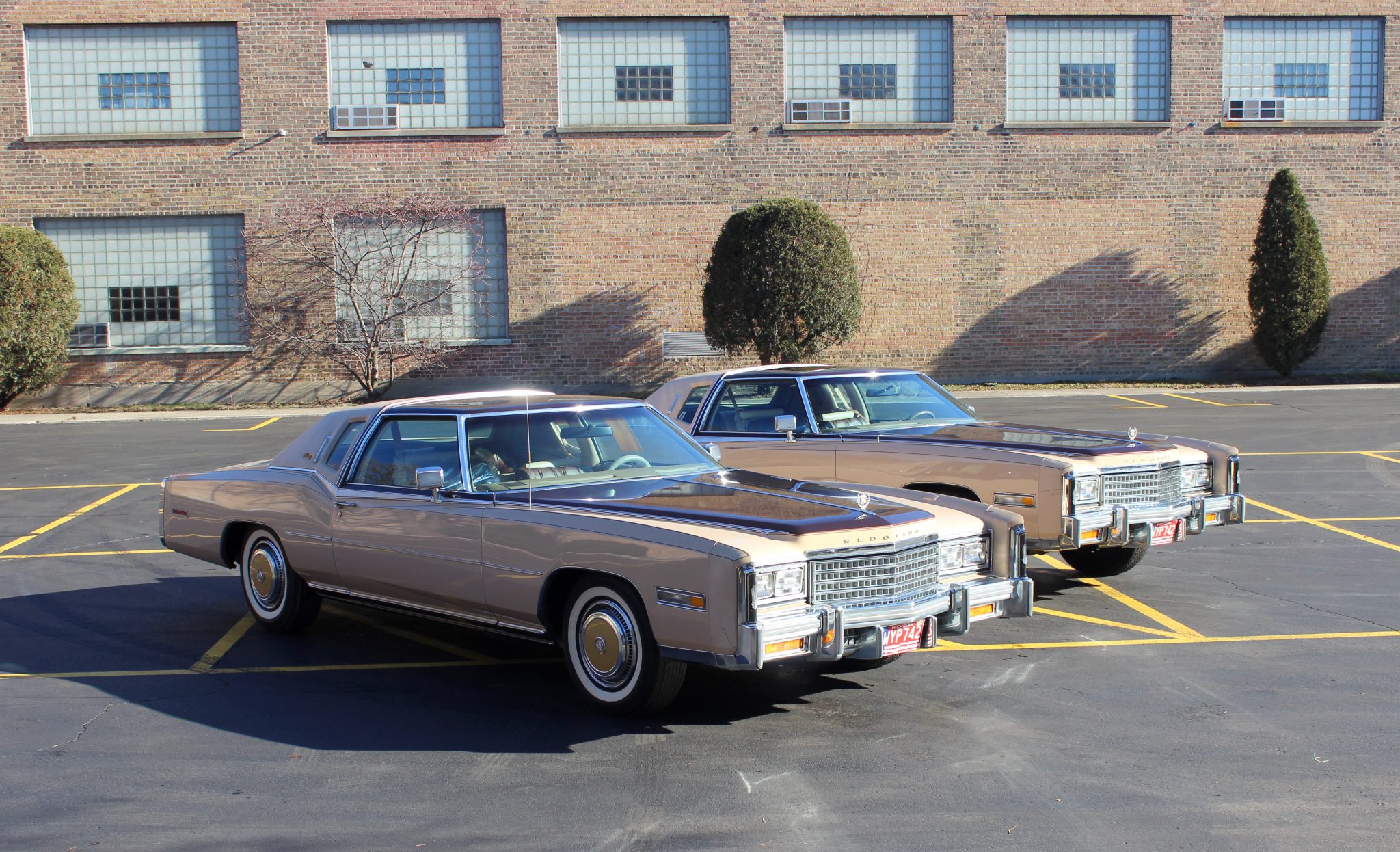 …There’s no other way to put it, we’re total suckers for cars with interesting backstories. We hear a lot of them; “How’d you manage to own the car for 40 years and only put 1,000 miles on it?”, “Well, I drove it home from the dealer, used it for a few weeks, decided it was a piece of crap, and parked it.”  Or, “This is a really valuable car. Is there any particular reason you left it stored for all these years with the top down?”, “I don’t know, must’ve been sunny out the last time I drove it.”  These are just a couple of the backstory comments that made us laugh over the course of the past year, but the deal we just closed on a couple of ultra-low-mile Cadillacs may take the cake for our favorite vehicle backstory of 2018. 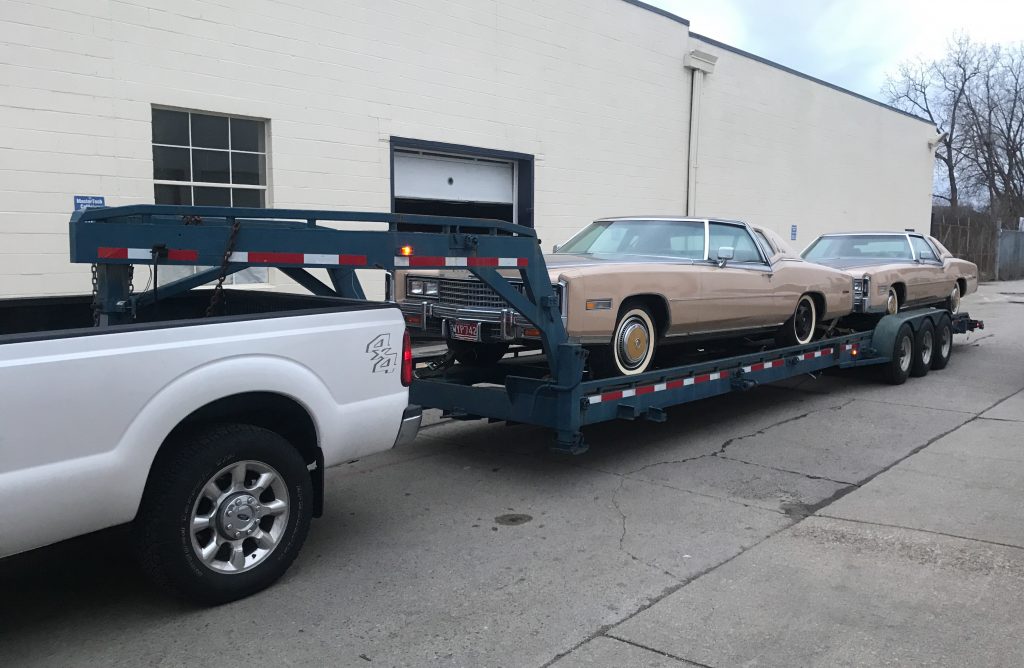 We were contacted by a guy just outside Detroit who told us he was looking to sell two ‘78 Eldorado Biarritz Custom Classics. Due to poor health in the family, the cars had fallen into his lap and he didn’t want them nor know what to do with the 40ft-worth of vintage American luxo-barge now in his possession. His father-in-law had bought the two Eldorados new in ‘78 and they remained in the family ever since. He’d actually put them away in storage as soon as he bought them, as Cadillac had announced the ‘78 Biarritz Custom Classic as the swansong of the big, beloved Eldorado and he speculated that they would one day become tremendously collectible. These cars were put away with less than 500 total miles from new between the two of them, protective plastic still on the seats, and the window sticker still stuck to the glass. Based on just a couple grainy, dimly-lit, flip-phone photos of the cars sopping wet, we decided the cars were worth the gamble and blindly wired the guy a respectable sum of money. 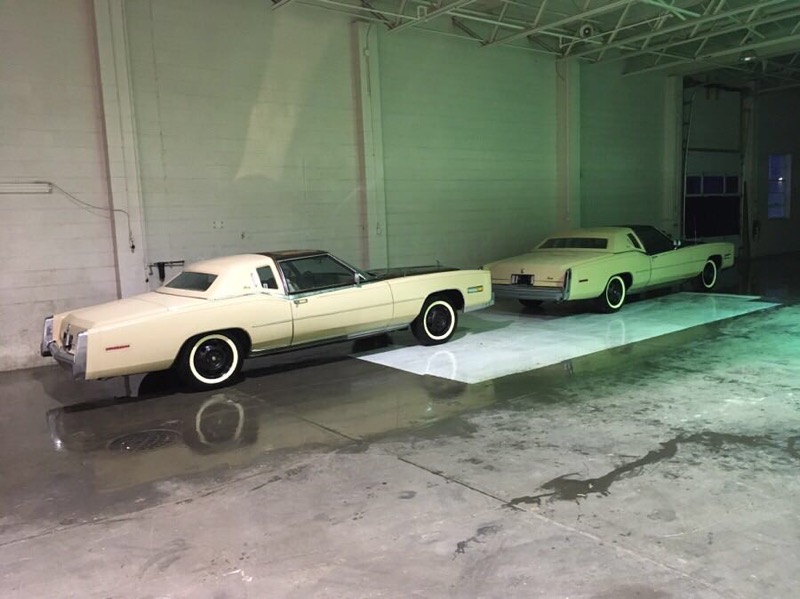 Would you buy two cars based on just that photo?  Yeahhh…it was nerve-racking, no doubt about that.  But the flip-phone-wielding, non-tech-savvy seller is a situation we routinely encounter, and [knock on wood] we’ve been pleasantly surprised upon delivery more often than not.  Anyway, we knew that the cars were special and the unbelievably low mileage was certainly enticing, but we were told that the two cars had spent the overwhelming majority of their lives locked in a sealed storage container, and that was a little unsettling.  While it sounds like a good thing, we’ve seen cars that have been stored long-term in cargo containers, and they haven’t always aged well.  These containers can develop leaks, and over the years things can get ugly.  While the deal had already been made and the cars were already paid for, we decided we’d drive all the way up to Detroit and pick the cars up ourselves, rather than hire a transporter.  We had to see the cars, storage container, and owner in person; we wanted the full backstory from the man himself. 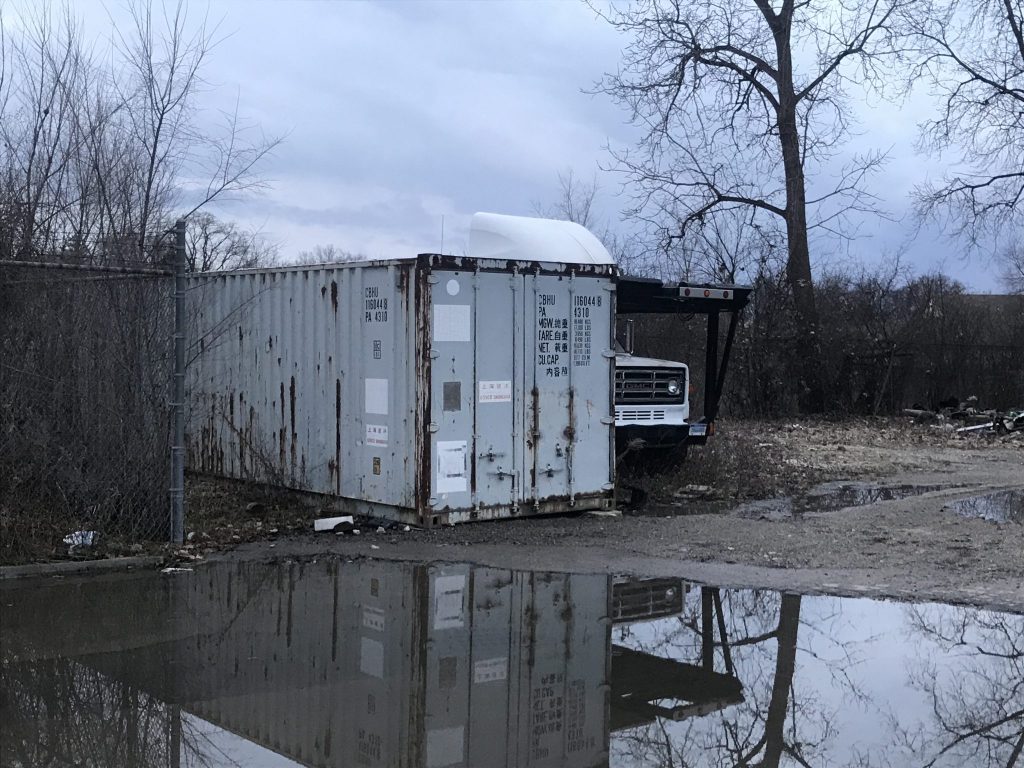 While it doesn’t quite look nice and cozy, the storage container was dry, leak-free, and the cars survived in miraculously excellent condition.  So, as I mentioned, the seller’s father-in-law bought the cars new and proceeded to put them in storage straightaway. But here’s where the story gets really good. The owner was Greek and had a big family, including two daughters. Both his daughters happened to get engaged right around the same time, and the family decided to have one big, combined wedding. Over 500 people in attendance, your classic “big, fat, Greek wedding”. But get this – the father gifted each couple a Cadillac.  Matching, 200-mile, collector-level Caddys in as-new condition.  How about that for a wedding gift?!  Neither couple was particularly interested in cars, and both couples opted to let the cars remain in storage after their wedding.  There they sat, all the way until late 2018, when the time to sell finally came.  The next generation, the original owner’s granddaughter now, was soon to be married and the family opted to sell the Cadillacs and fund that celebration.  No 20ft long, 5000lb wedding gifts this time around.  When it came time to sell, the son-in-law that we dealt with had just gone on Google, searched “sell my classic car”, and called the first number he saw, which happened to be us.  This was one opportunity we weren’t going to let slip through our fingers! 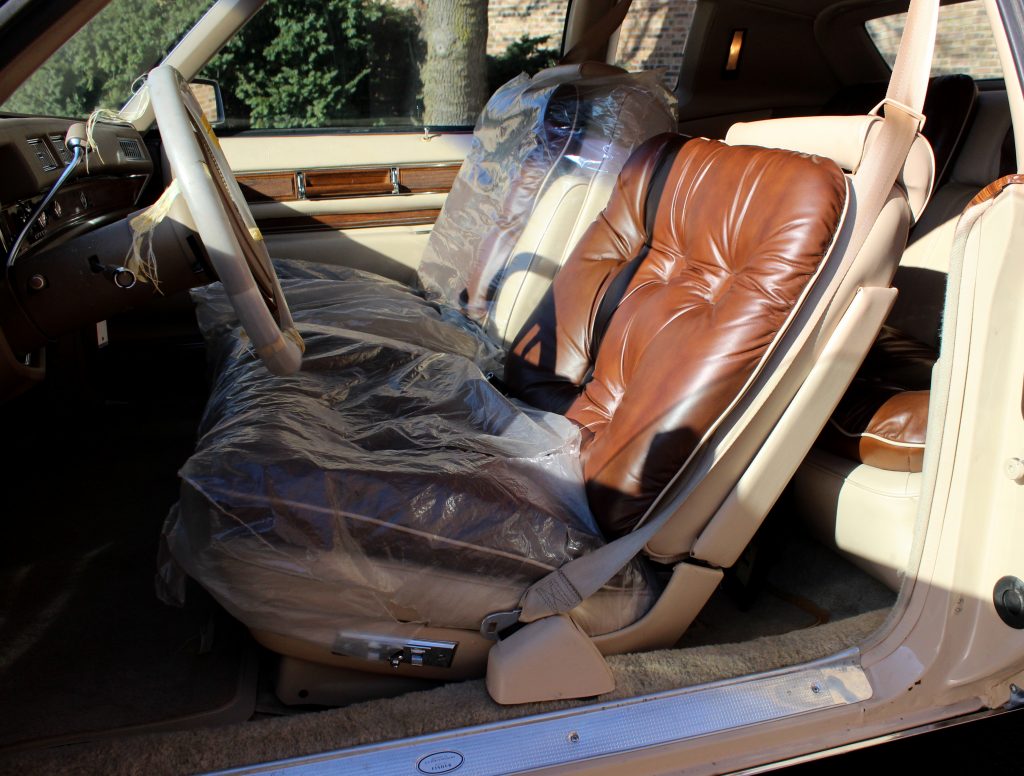 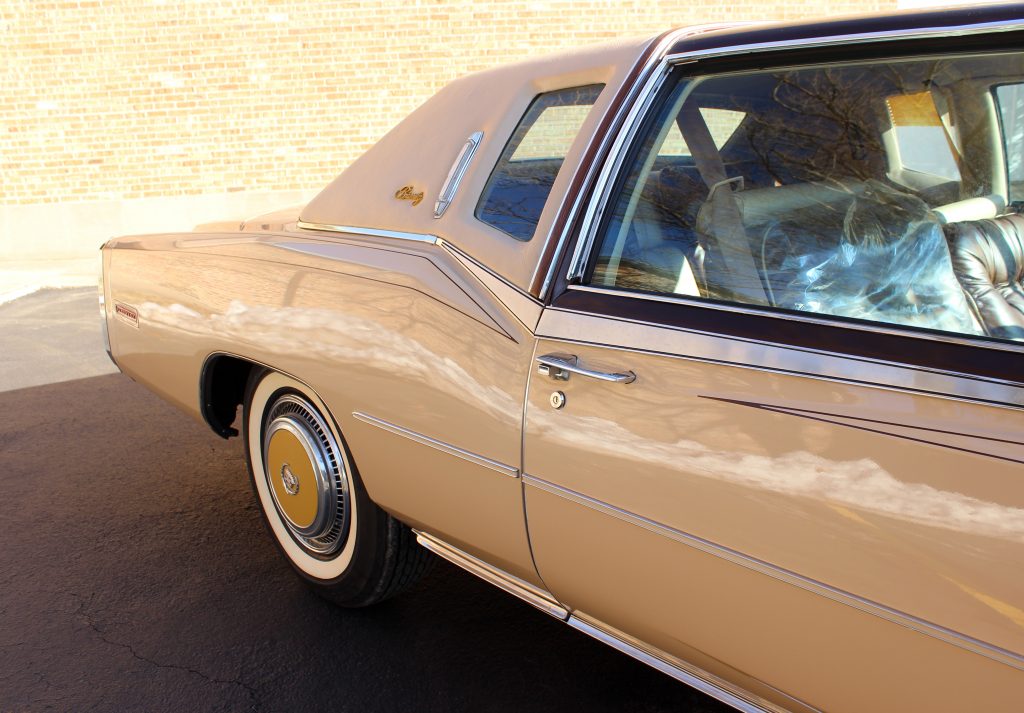 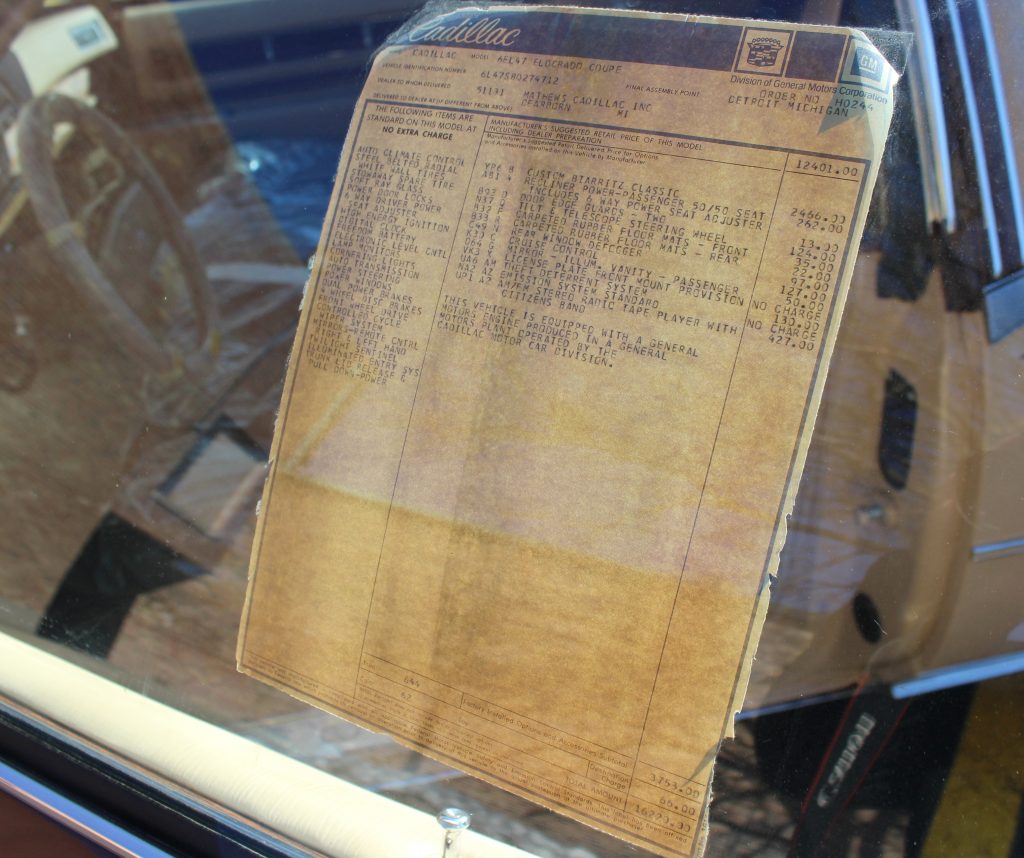 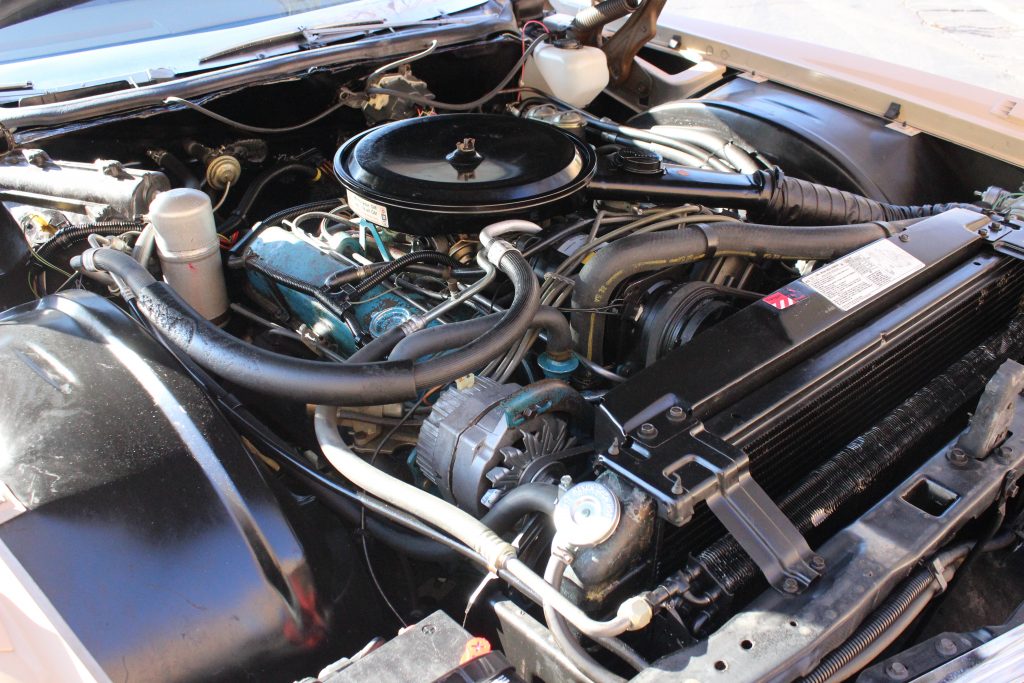 Since bringing the cars home and giving them a thorough looking-over, we’ve elected to leave them just as they are.  They’re only original once! So what if the plastic filler panels cracked a bit over the years, that’ll happen to 40 year old plastic. If anything, the filler panels just verify the original, honest, and unmolested charm of the cars.  We’ve driven the cars about a mile a piece, the farthest they’ve been driven since 1978!  How cool though, to open the door of a 40 year old car, slide in over the plastic seat cover, grip the protective-wrapped steering wheel, and roll down the road with the original window sticker obstructing your periphery. 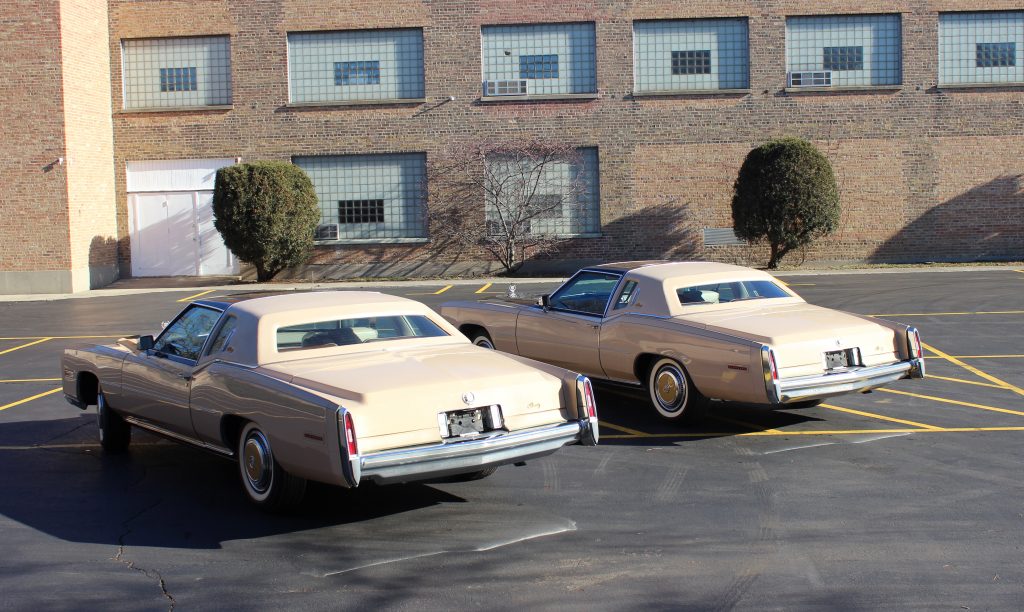 The real question though, if these cars were yours, drive or preserve?  My gut says preserve, but a few thousand more summertime highway miles couldn’t hurt, right?  A 55mph, fully reclined, right-lane cruise across the US of A has never sounded more appetizing.