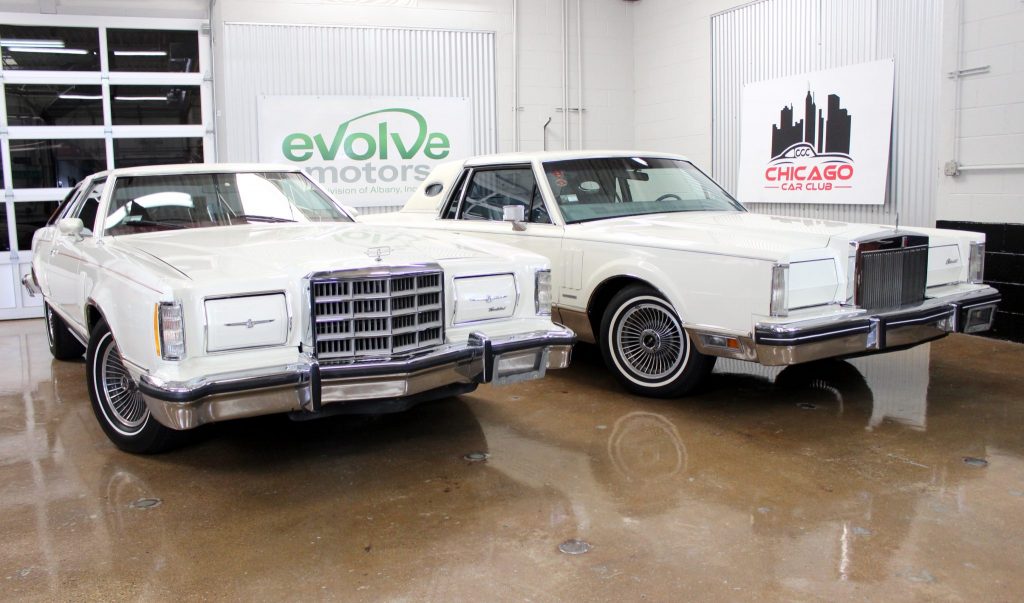 While so many of the cars that we purchase are scattered about the United States, which can be a bit nerve-racking as a buyer, every so often we’re lucky enough to come across gems right here in our backyard.

A few weeks ago we had a woman who has long been coming into our shop for paint work and dent repair stick her head into the showroom and ask if we would be interested in taking a look at, and potentially making an offer on, two cars that belonged to her neighbor, who had recently passed away. Knowing nothing other than that they were “old white cars”, we went on over. When we got into the garage we were met with a pleasant surprise, two big ol’ square cars that, while a bit dusty, looked to be in showroom level condition right from the get-go. Parked alongside each other in perfect his and hers presentation were an ‘83 Lincoln MKVI and a ‘79 Ford Thunderbird. Both white, the T-Bird with a red pinstripe and red leather, and the Lincoln a blue pinstripe and blue leather. We were blown away by the level of preservation, especially considering that these cars had been sitting for the better part of a decade. Paint looks to be original? Out comes the elcometer….yep, original paint on both. We get inside the T-Bird first; wow this thing is unbelievable. What does the odometer read? Just 11,760 miles?! How about the Lincoln? 37,720! Needless to say, we made a deal. 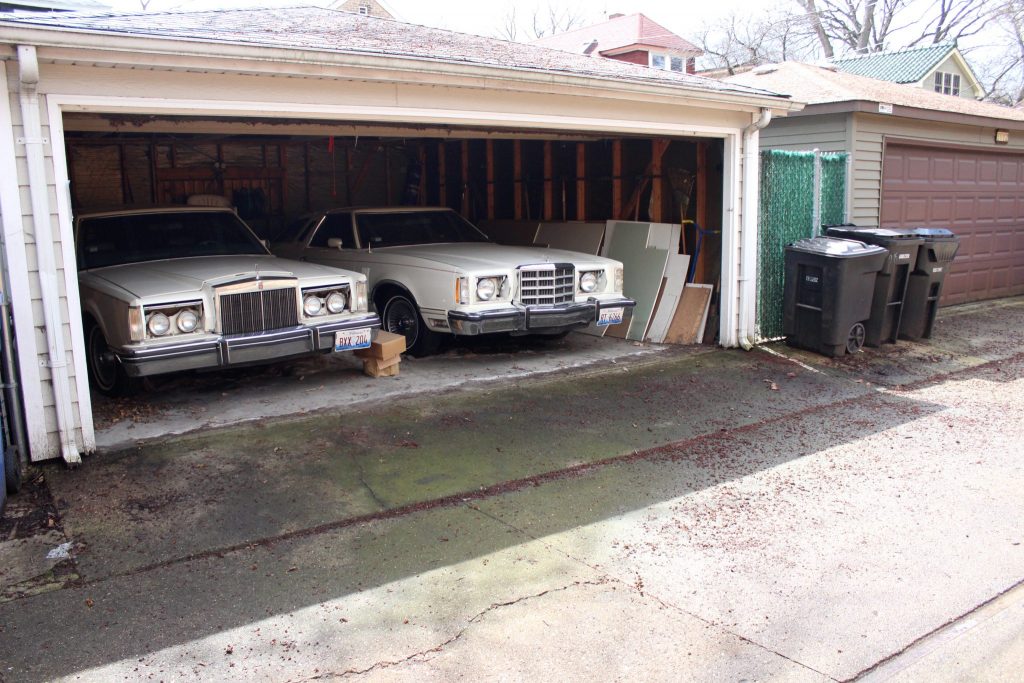 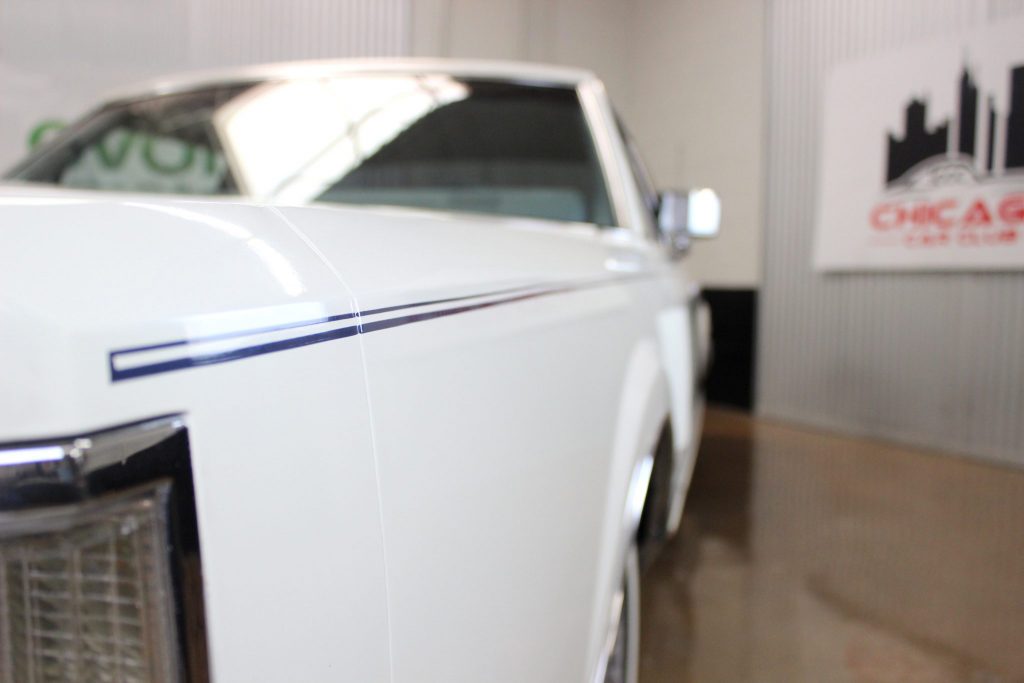 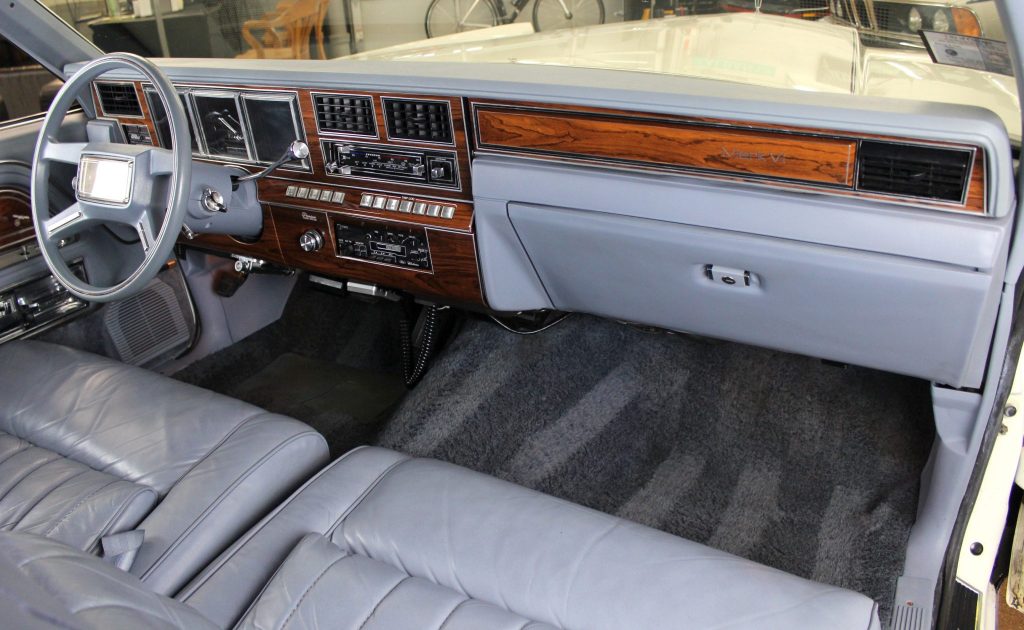 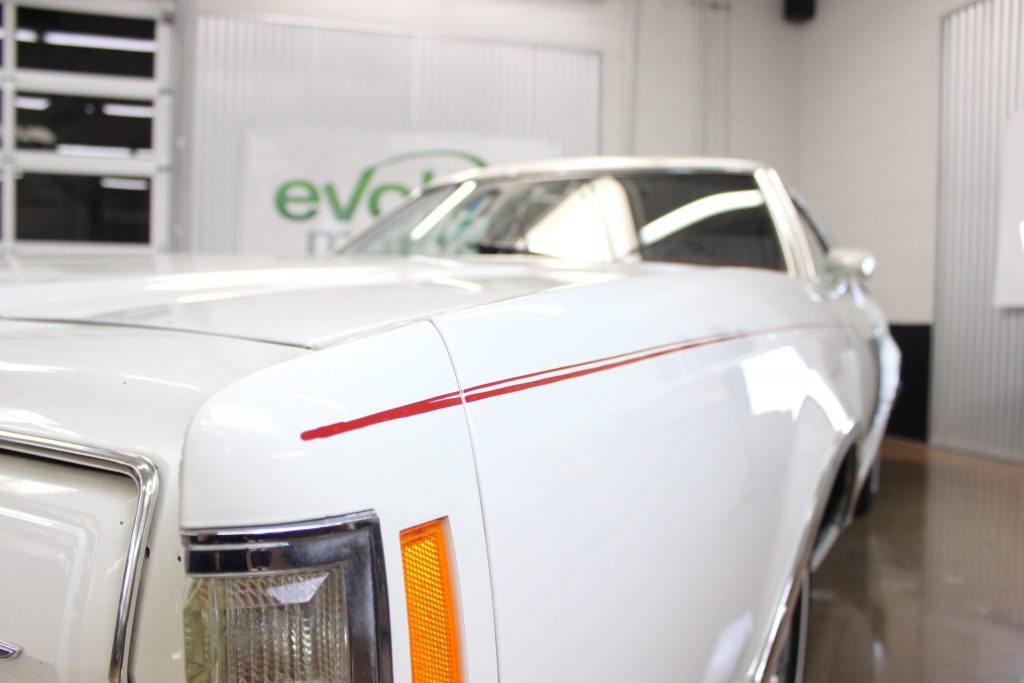 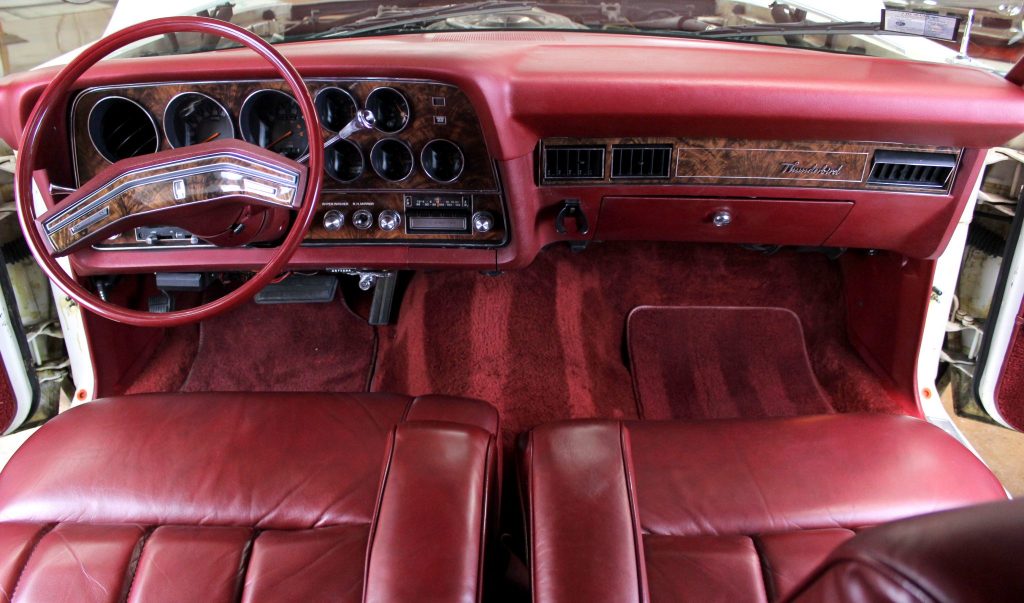 Actually going to and poking around someone’s garage can really provide some insight into that person’s life. For example, when we arrived to see these cars for the first time, we were shown into the garage by a realtor helping to vacate the estate, someone who had never actually met the gentleman who had owned the cars since new. As always, we were hoping to have the opportunity to ask some questions about the previous owner and his relationship with his cars, as we really enjoy piecing together the history of the cars that we buy. We absolutely feel that the backstory of a car can carry weight in the resale market. When the realtor opened the garage door, the first thing we noticed was a Freon system mounted to the back wall of the garage. Wow, we thought, this guy must have maintained the A/C himself. That’s a little out of the ordinary. We poked around the garage a little more and started picking up on other tell-tale signs that the previous owner was a real enthusiast; the garage was extremely well lit, there was a sophisticated security system on not just the garage, but the cars too. The batteries on both cars had been disconnected, and there were big sheets of plastic underneath the cars, so to prevent any drips from staining the concrete garage floor. All things considered, we figure this guy must have been a nut!

As I mentioned, we went ahead and made a deal to purchase the two cars. That following week when we arrive with our flatbed, we were pleasantly surprised to be greeted by Yolanda, the elderly wife of the late original owner. She could sense our enthusiasm, and told us that it made her very happy to see the cars pass on to people who look at the cars in the same light as her late husband. She confirmed every suspicion we had about her husband; he was a doctor and a complete and utter perfectionist. She said that even throughout the winter months, when the cars sat largely unused, he’d make a routine of going into the garage and just spending time with the cars. Our kind of guy. 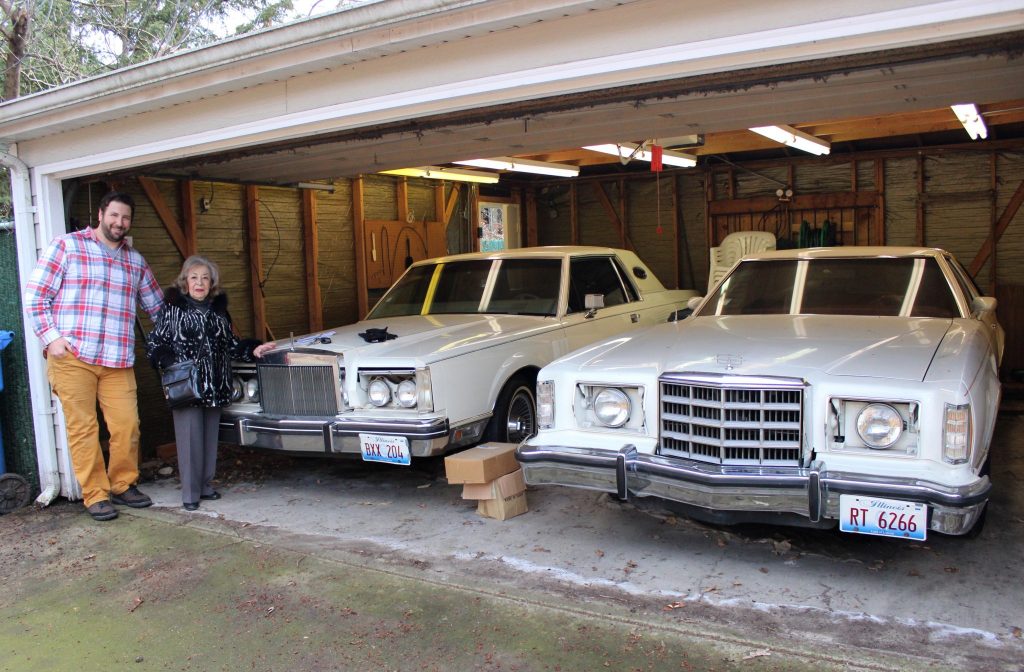 We went to pick up the cars with our sights set on getting both cars running, intent on driving them out of the garage. Considering that the cars had been sitting for close to decade, we figured it could be a full afternoon’s job. Within just a few minutes, both cars were silently idling, requiring nothing more than a battery pack, some air in the tires, and a little shot of starting fluid. Both cars came to life without even the slightest hesitation. It was almost as if they had been just patiently hanging around, awaiting the day they’d get an opportunity to make spark again. 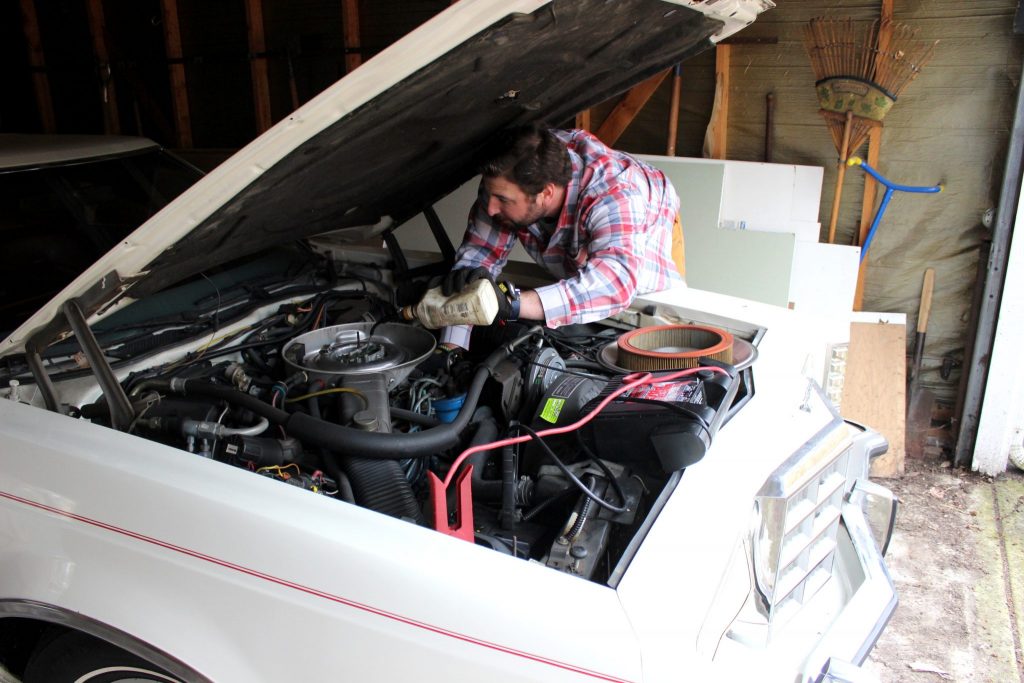 Once getting the cars back to our shop, we gave them a thorough cleaning, put in some fresh fluids, did a proper photo-shoot, and hit the road to get acquainted. The two bright white land-yachts, fresh off a full detailing, garnered a ton of attention on the road. Bystanders clearly got a kick out of seeing the two cars moving through traffic side-by-side. Thumbs ups all around. The best way to describe the cars’ on-road characteristics is to say that they’re both dream boats. They float down the road with effortless comfort, and are dead silent from inside the cabin. Thanks to the previous owner’s meticulous nature, the cars’ powered systems all function perfectly, including the air conditioning. The cars are now listed for sale on eBay [T-Bird, MKVI] and the Evolve Motors site; while it’ll be bittersweet to see them go, we feel privileged to have had the opportunity to bring these beautiful, time-capsule-quality square cars back into the limelight.