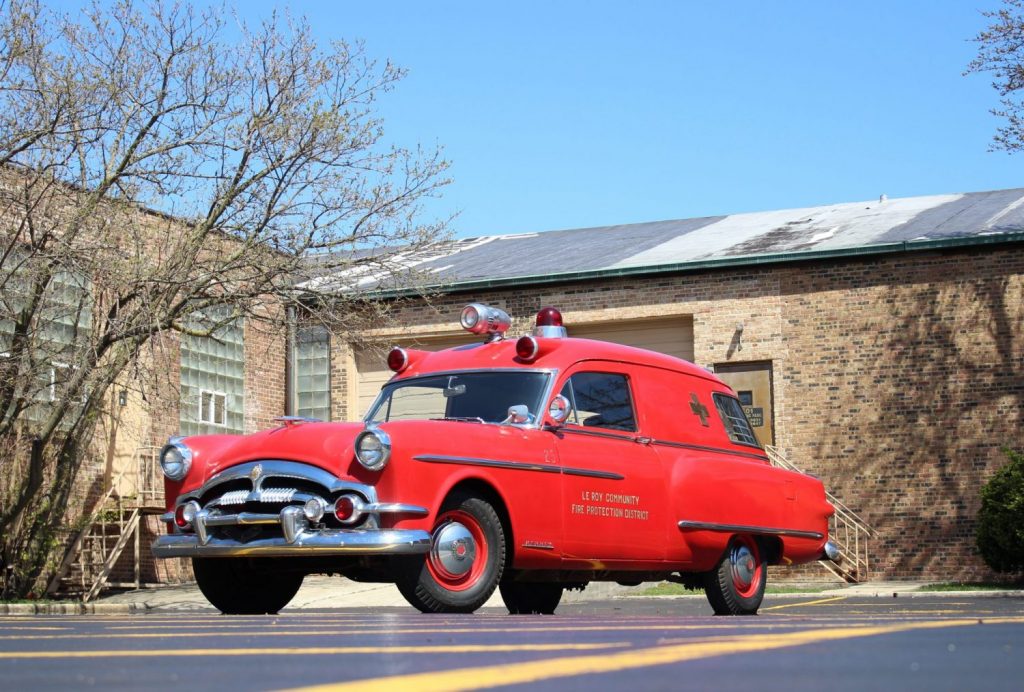 While we fancy ourselves automotive gurus, or at least within the space of classic and collectibles, every once in a while we’ll be contacted by someone looking to sell a vehicle that, as much as we hate to admit it, we’ll need to reference a quick Google search in order to fully grasp what’s at hand. These oddball, little-known vehicles, while definitely not the poster cars of our youth, almost invariably account for our most entertaining, fun-to-deal-in inventory. There are a number of reasons as to why these vehicles so often yield a positive experience, but the overarching driver is the fact that getting up close and personal with a vehicle outside of our typical wheelhouse presents an excellent learning opportunity. It’s a way to keep things fresh, broaden our horizons, and delve deeper into previously uncharted reaches of the automotive hobby. There are other positives too; for example, it’s a heck of a lot easier to sell a particular vehicle when it’s the only one on the market, let alone the potential value-add of being the sole example available. At this very moment, the oddball of our fleet hails from Packard’s line of Professional Cars, a ‘54 Packard Henney Junior Ambulance. 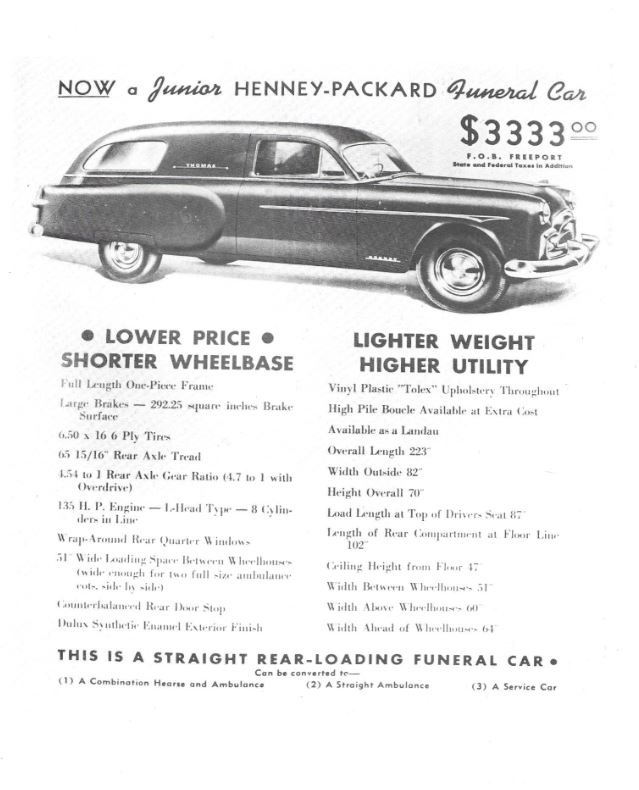 So, the big question. What is it, exactly? In 1953 and 1954, Packard, in collaboration with coachbuilder Henney, offered what they called the “Junior”, a smaller, more budget-friendly counterpart to their line of full-sized Professional Cars. Standard Professionals had a 156” wheelbase; the Junior was quite a bit smaller, with a 127” wheelbase. So while still useful in professional services, it was slightly easier to navigate and, more importantly, easier to fit in a standard sized garage. Interestingly enough, Henney didn’t actually realize the Junior’s tremendous production costs until it was too late. It’s been reported that, on average, Henney lost just over $300 on each Junior they sold. In today’s dollars, that’s about a $3,000 loss on every single car! In order to combat the loss, Henney/Packard hiked Junior prices way up midway through production, from $3,333 to $4,333, which effectively killed the model. Junior production over the two-year run totaled just 500 units, roughly half of which were under government contract, the other half sold to the general public. This particular car is one of just 120 units produced for 1954, and in addition to having an interesting, known history from new, retains much of its original equipment. This example has an impressive range of equipment for a Junior, having come factory-equipped with a siren, dome rotator, front tunnel lights, a cot, and jump seats in the rear. But while well-equipped, what really sets this particular example apart from the rest is its fantastic backstory… 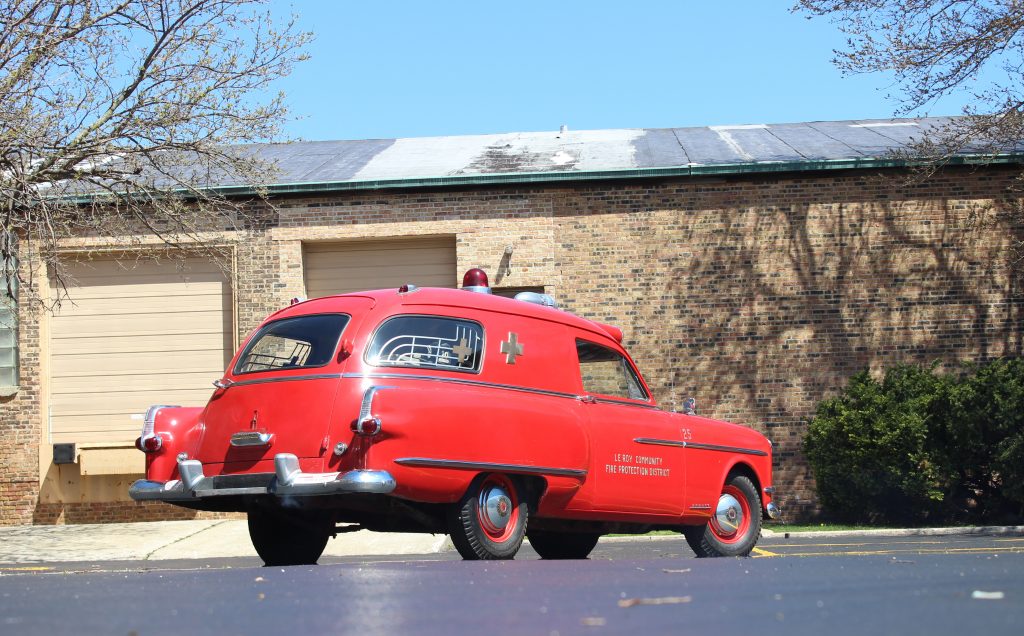 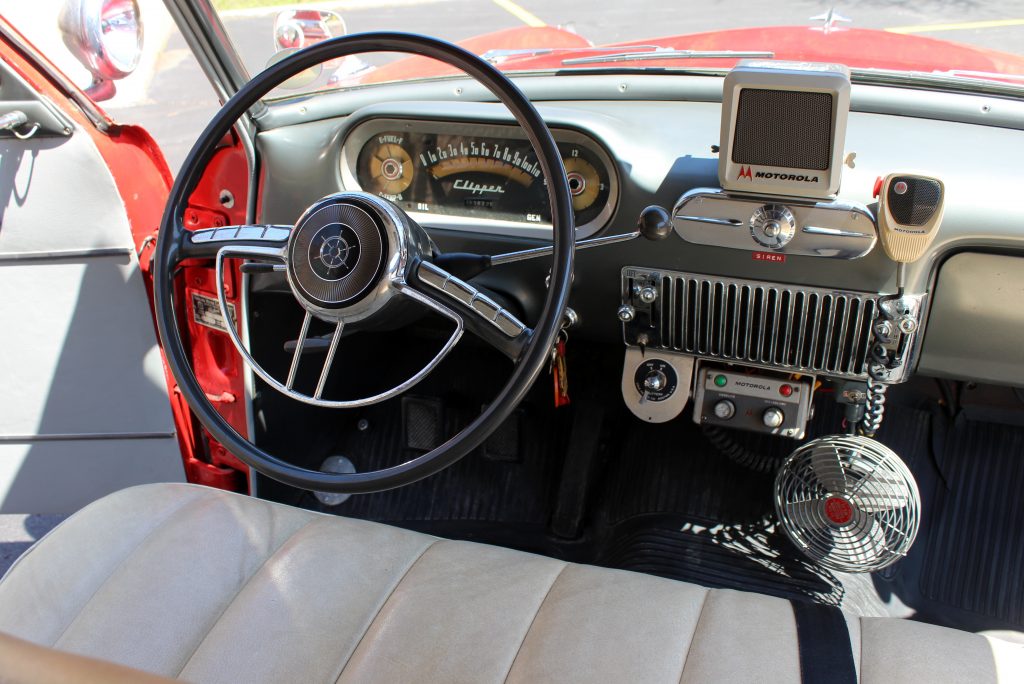 Originally delivered to The Eureka Williams Company of Bloomington, Illinois, a manufacturer of vacuums, this Junior spent the first decade of its life serving as an ambulance for the company’s on-site medical center. One of the staff members at Eureka was close friends with a fireman at the LeRoy Community Fire Protection Department, so when Eureka had gotten their use out of the car, they sold it to the LeRoy firehouse for $1. We were actually able to get the full backstory on the car from the 80-year-old LeRoy Fire Chief himself, and he provided a tremendous amount of information about the car’s history. When the firehouse bought the car in 1965, it wore a supposedly hideous florescent green Eureka-themed paint job, which the firemen of course promptly sprayed over with red. The fire chief chuckled as he recalled a time in 1968 that they piled nine guys, in full fire-fighting gear, into the back of the Junior and responded to a call. Nine fireman piling out of the back; it sounds like something out of a cartoon now, but this actually happened in the 60s! The LeRoy Fire Department kept the car from 1965 until 1985, when they listed it for sale in the local newspaper for $2500. The car stayed local, and was purchased by a gentleman who made a habit of taking it out to local car shows. The sale was under one condition, the firehouse would leave their lettering on the car in order to preserve its history. The firemen obliged and, fueled by the buyer’s enthusiasm, even threw in a bunch of used equipment – helmets, a fire suit, oxygen tanks, etc. The new owner was so appreciative that he kept in touch and actually put together a photo album from his first few years of ownership and mailed it back to the firehouse; the fire chief still holds onto the photo album today, decades later! This post-firehouse owner held onto the car all the way from ’85 until this year, when we purchased it from him along with two other ’54 Henney Juniors. So yes, of the 120 total built for 1954, three are currently here at our facility. A fascinating vehicle for sure, and one that we’re particularly excited to have in inventory. 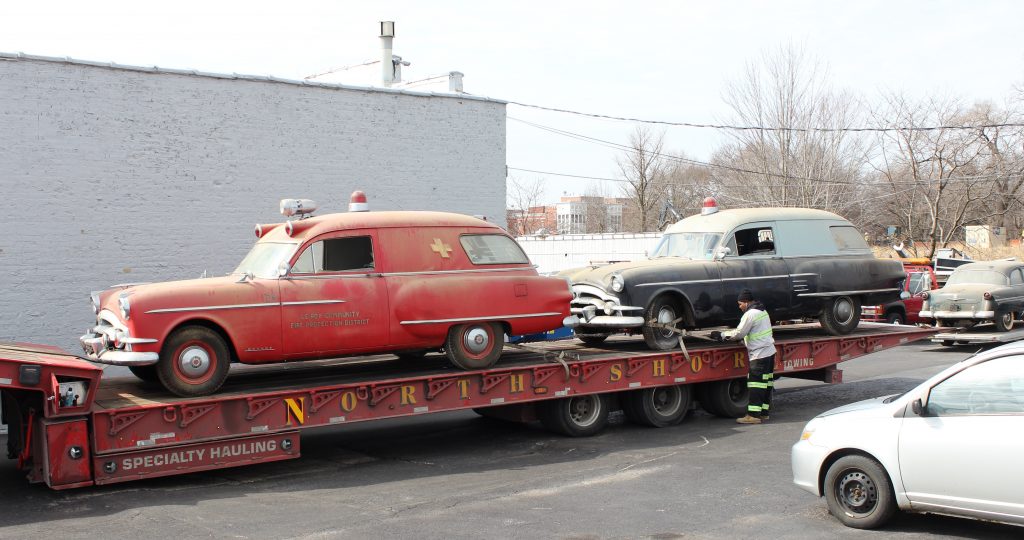 The car is now listed for sale on our site, link HERE.