…Though it’s now been thirty years since the tragic end of Group-B, the buzz that the series created within the motorsport community has yet to fade away.  The fire-breathing, turbocharged monsters of Group-B are renowned as some of the most ferocious, difficult-to-tame racing cars in all of motorsport history.  The drivers of these cars were not only celebrated for their phenomenal skill, but for their superhuman-like focus and fearlessness.  It has been said that subconscious self-preservation instincts are what really separated the great drivers from the good ones, as drivers were truly living on the brink of death while behind the wheel at race speed.

Prior to the Audi Quattro taking the World Rally Championship by storm, rally cars were two-wheel-drive.  The instant success of the Audi Quattro showed other manufacturers that four-wheel-drive systems were the future of the sport.  For this reason, the Audi Quattro is universally viewed as the most important rally car of all time.  By the time Group-B came to an end in 1986, the turbocharged 5-cylinder Quattro was reported to be putting down 591hp while weighing only 2400lbs, good enough for a zero to sixty sprint of less than three seconds, on gravel.  With an absolute dream-team of drivers including Stig Blomqvist, Michèle Mouton, Hannu Mikkola, and Walter Röhrl, Audi’s rallying program was a force to be reckoned with in the early 1980s. 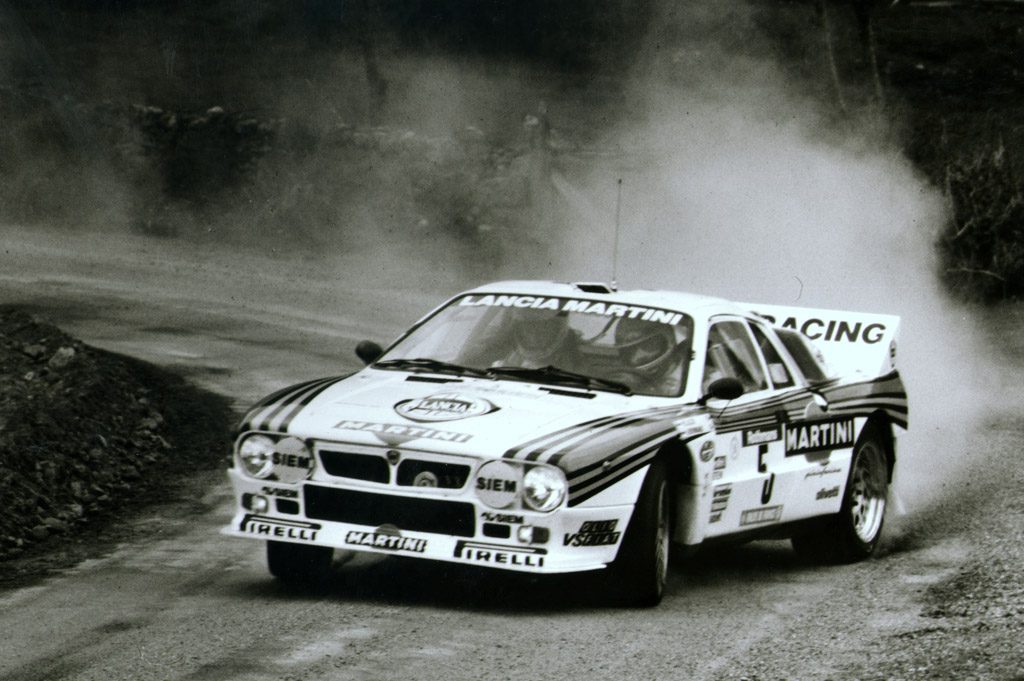 Quite possibly the prettiest car to ever win the World Rally Championship, the Lancia 037’s 1983 championship win marked the final time a rear-wheel-drive car would take the title.  The 1983 season was a showdown between reigning champions Audi, and Lancia, who had been plagued with mechanical issues throughout the previous season.  Behind the wheel of Lancia’s 037 was Walter Röhrl, who later went on to have phenomenal success driving for Audi, and Finland’s Markku Alén.  The 037 was slightly down on power as compared to its rival Audi Quattro, but with its weight advantage and a future hall-of-famer in Walter Röhrl behind the wheel, Lancia was able to capture the manufacturer’s championship. 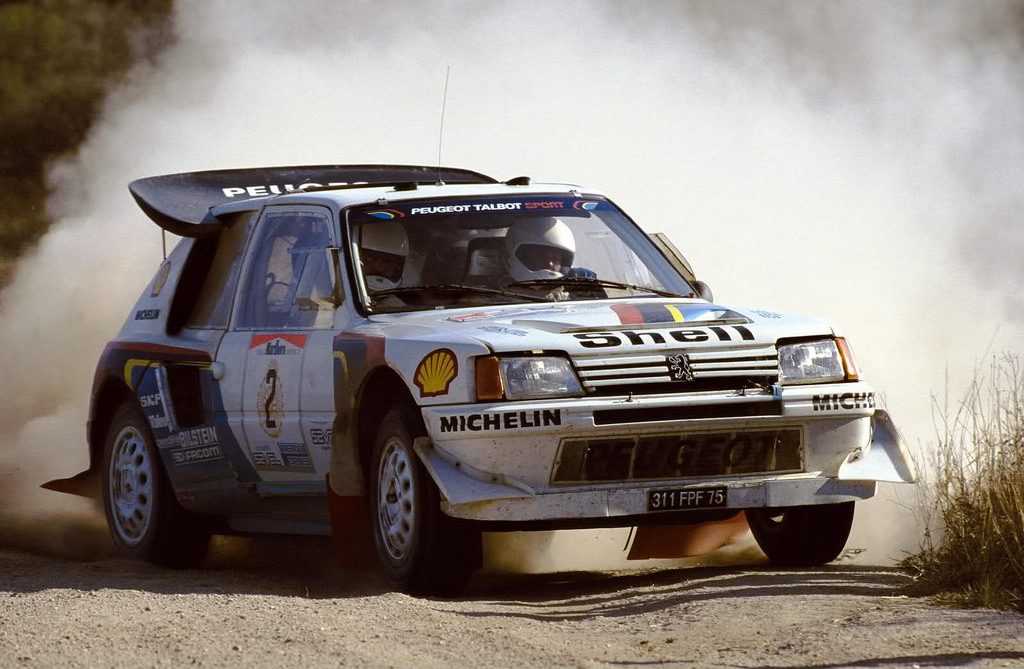 When the Peugeot 205 T16 arrived on the scene in mid 1984, it instantly became the car to beat.  Like the previously-dominant Audi Quattro, the 205 T16 was four-wheel-drive and heavily turbocharged.  However, the 205 T16 was mid-engined, while the Quattro was front-engined.  With a team of drivers including the likes of Ari Vatanen, Timo Salonen Michèle Mouton, and Juha Kankkunen, Peugeot was able to knock Audi off their throne and secure both the manufacturers’ championship and drivers’ championship in 1985 and 1986. 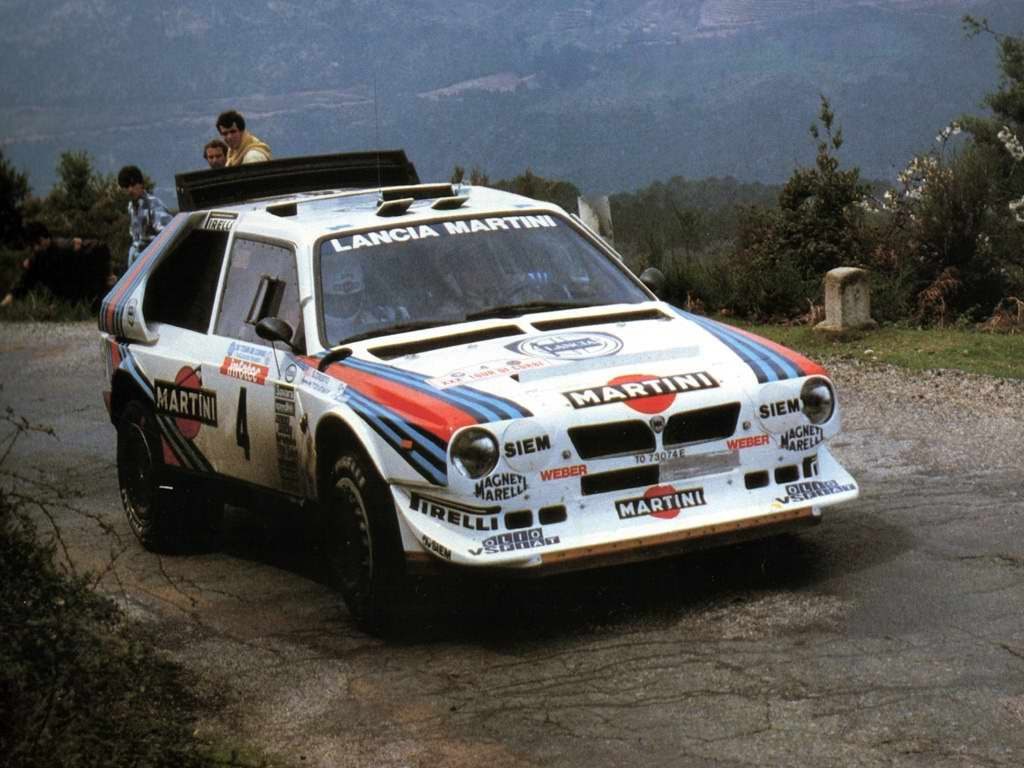 The Lancia Delta S4 is one of the icons of Group-B and deserves a spot on this list, though it never actually won the Group-B championship.  With the increasing competition from teams with four-wheel-drive cars, Lancia decided to forego their rear-wheel-drive 037 and enter an all new, four-wheel-drive powerhouse, which they called the S4.  The S4 featured the most radical engine rallying had seen yet, a four-cylinder that was both turbocharged and supercharged.  The supercharger would override the turbo-lag on the low end, then the boost would kick in at 4000rpm.  The Delta S4 was an instant success, winning its first time out with Henri Toivonen at the wheel.  With the phenomenally-quick Toivonen and former champion Markku Alén on their side, Lancia had high expectations for the 1986 season.  Then tragedy struck.  Just four races into 1986, Toivonen and his co-driver, Sergio Cresto, were both killed when their car plunged into a ravine and burst into flames.  The Lancia team then vowed to win the championship in their honor.  They just missed it, finishing second in both the manufacturers’ and drivers’ championships.  1986 would be the final year of Group-B competition, having been shut down as a result of multiple driver and spectator fatalities.  With the Lancia S4’s instant success, it’s more than likely that if Group-B had been able to continue, the S4 would have become a championship winner.  After the shut-down of Group-B, the Group-A spec Lancia Delta went on to become the winningest World Rally Championship car of all time, winning 11 titles, including 6 consecutive WRC titles between 1987-1992.

For more Group-B goodness, take a look at the following video.  Fantastic footage.  It’s not hard to see why Group-B was deemed “too dangerous” for both drivers and spectators.  Credit to YouTuber “Mr. M” and HistoricRacingHD: