Mazda Miata – What’s All the Buzz About?

Mazda Miata – What’s All the Buzz About? 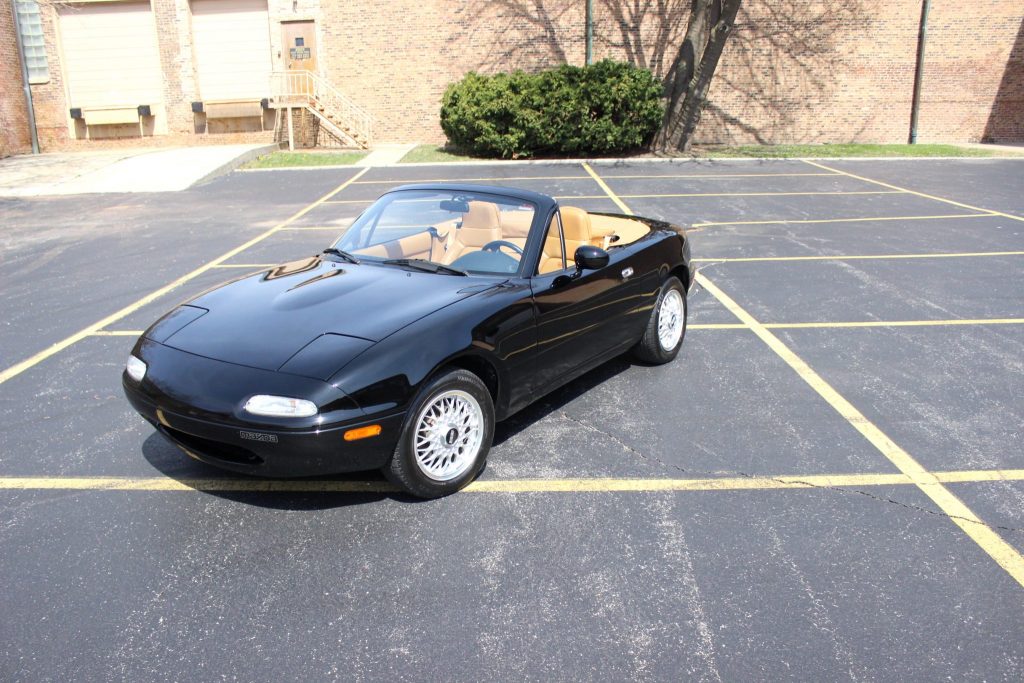 Last month we at Chicago Car Club purchased our first Miata, a ‘92 “Black & Tan” with just 6800 miles on the clock. Until very recently, we hadn’t quite understood why the Miata had developed such a cult-like following among car enthusiasts. We had always thought they were nice looking lil’ cars, particularly the first generation examples, but were never really compelled to track one down and purchase. From time spent on car-related websites like Jalopnik, we had repeatedly seen the “Which car should I buy?” questions posed, and swarms of enthusiasts responding with “Miata is always the answer!”  Having now had seat time in what is undoubtedly one of the nicest ones out there, it’s all beginning to make sense. Sitting in the showroom alongside far more “desirable” metal, there’s a certain charm that makes the Miata stick out and look so appealing. The design is sporty but not boy-racery, well-proportioned but not overstyled. It finds itself in a sweet spot; now 25 years old, the first generation Miata is both an introductory sports car, and an introductory classic car. 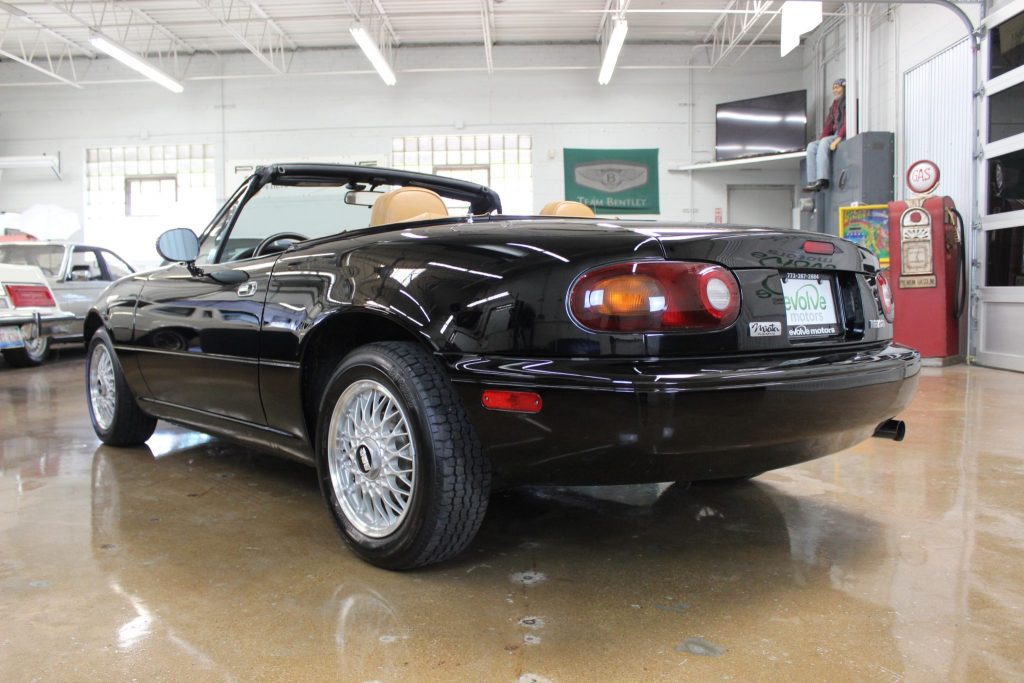 Now, a bit more about the car you see here in the photos. The backstory of our car is an interesting one; in late 1991, Crown Mazda of Holland, Michigan ran a raffle, the prize being a brand new Miata right off the showroom floor.  The gentleman, lets call him Bob, who happened to win the raffle had it delivered to his house in Michigan, and proceeded to park it in his garage. There it sat, never having been road registered, for four years. One of Bob’s subordinates, lets call him Dave, was a car enthusiast and struggled to wrap his head around how Bob could allow the Miata to just sit in his garage indefinitely. Dave badgered Bob to no end about his Miata until, in 1996, Bob caved and decided to just go ahead and give the car to Dave. The car was then finally registered and served as Dave’s summer driver for a handful of years before he gave it to his sister, who had expressed enthusiasm for the car ever since Dave first started driving it. We purchased the car from her, with just 6800 miles on it. She told us that car was always garaged and driven with utmost care only on sunny days, and the condition of the car speaks to that. 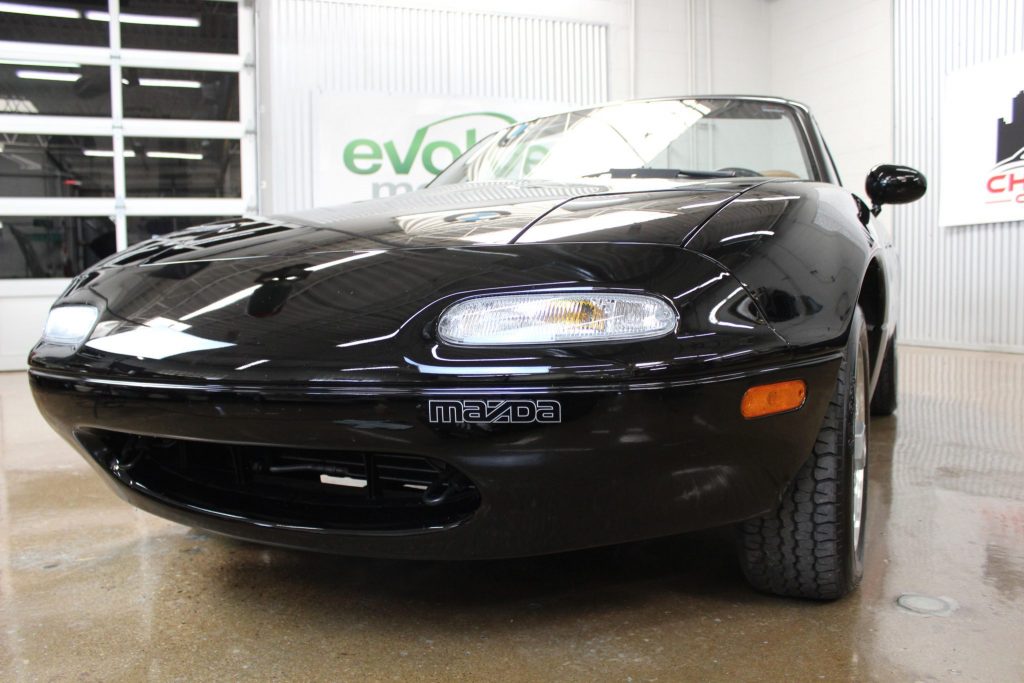 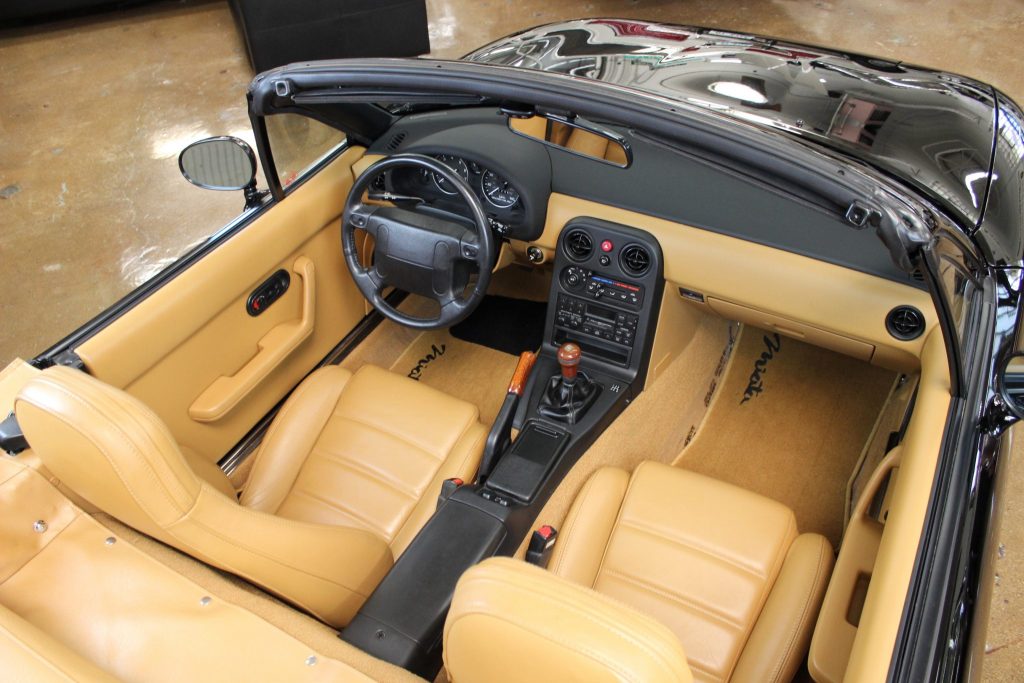 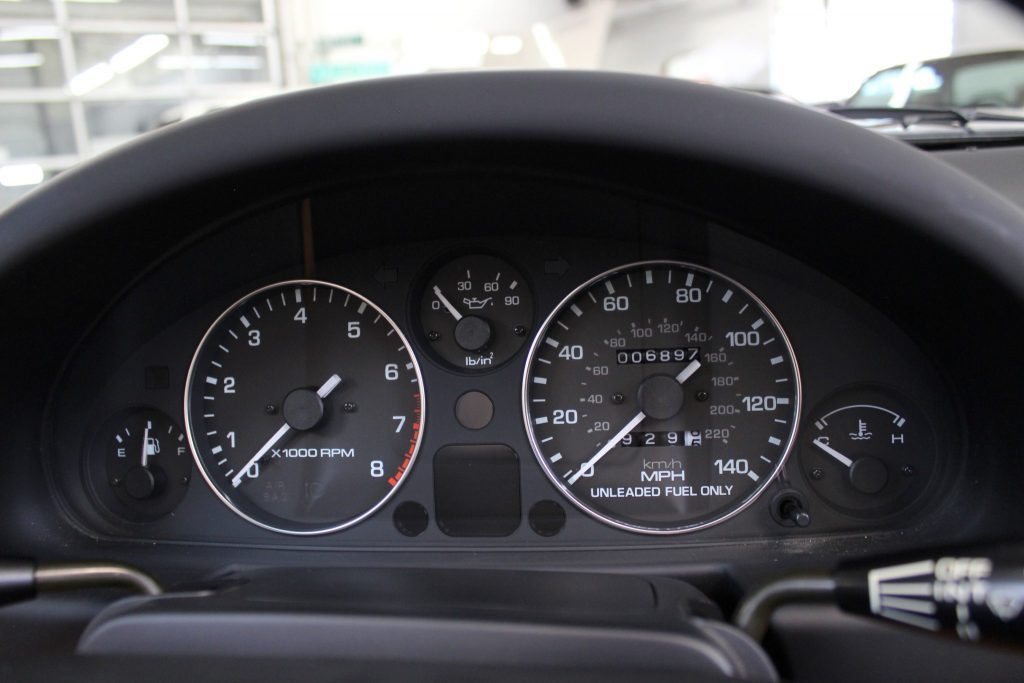 This particular car is very well-spec’d, which was surprising to us considering the fact that it was a giveaway car.  It was optioned with the G9 package, which consists of headrest speakers, cruise control, power antenna, stainless scuff plate, a Nardi wood shift knob, wood handbrake lever, and BBS alloy wheels with locks.  The car was also optioned with air conditioning, Miata-branded floor mats, and a limited-slip differential.  There are still the factory stickers on the large majority of mechanical components both underneath the car and under the hood.  On the road, the car feels new in every respect. While the 1.6L DOHC 16 valve inline 4-cylinder isn’t known for its tremendous power output (114hp), the car’s short-throw 5-speed, 4 wheel power disc brakes with vented front rotors, limited slip differential, and sport-tuned stainless exhaust make it extremely fun to drive. 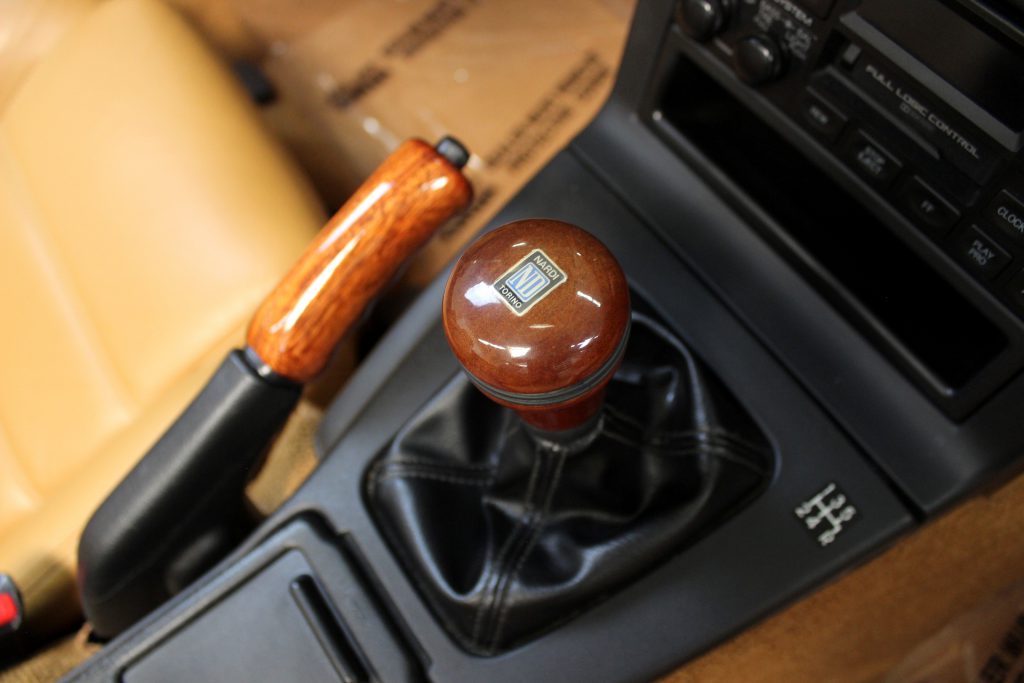 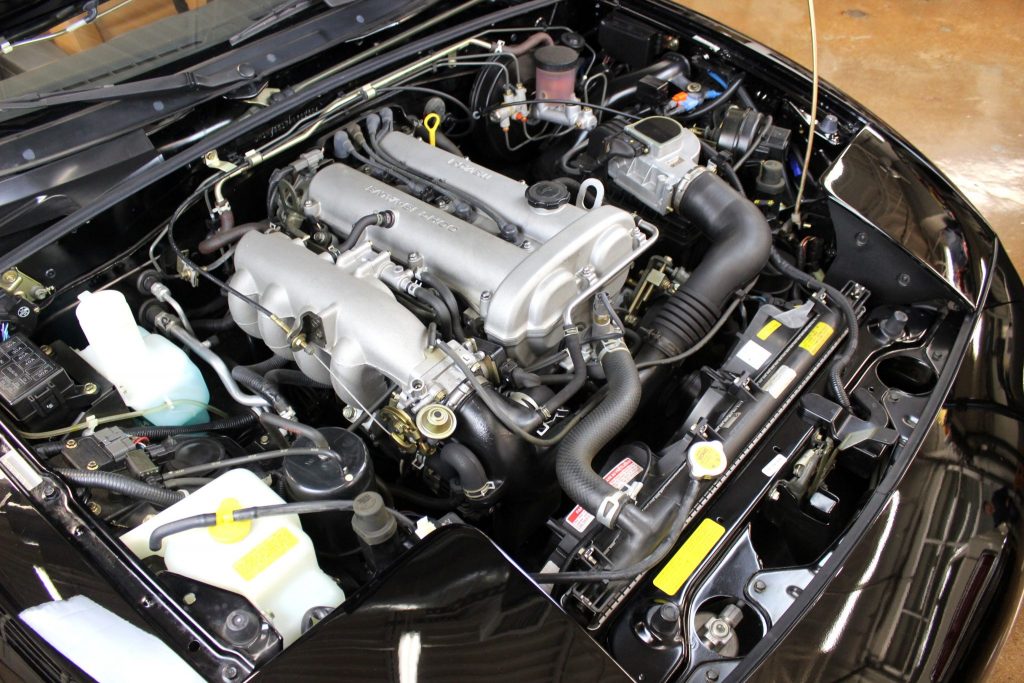 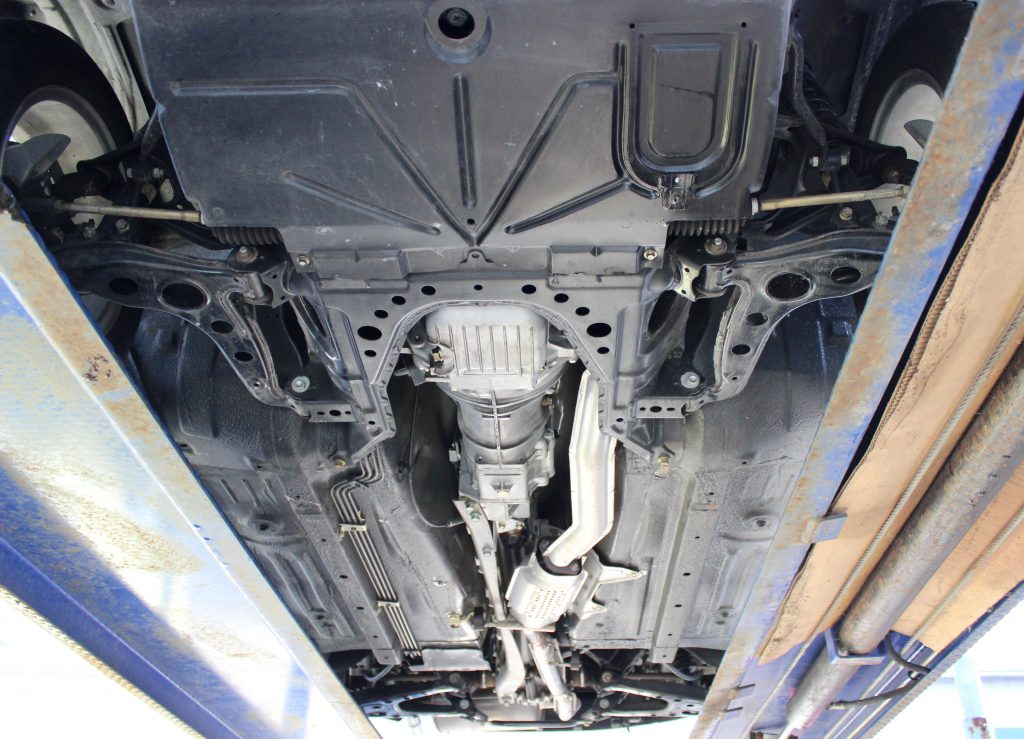 Everybody knows it’s most fun to drive a slow car fast, and the Miata is the perfect example of that. The suspension-focused design of the Miata offers a uniquely engaging driving experience; it’s a momentum car, so you’re constantly downshifting to find the power.  That may sound like a negative attribute to some, but think about it; what’s the most fun part of driving a sporty car?  Quick shifts!  This ties back to the Miata’s cult-like following; it all makes sense now.  It’s not just the Miata that its followers are crazy about, it’s the approach to motoring that the car represents – an involved driving experience that requires finesse and technique to squeeze “sporty” performance out of it.  And since the car is fairly down on power, its performance limits can be reached responsibly on well trafficked public roads.  A car that evokes the feelings of a sports car but can be enjoyed at its limit within the confines of the law?  That’s something we can all get behind!

The car is listed for sale on eBay, Hemmings, and the Evolve Motors site.