POTUS Eisenhower Limo to be Sold “No Reserve” at Mecum

POTUS Eisenhower Limo to be Sold “No Reserve” at Mecum 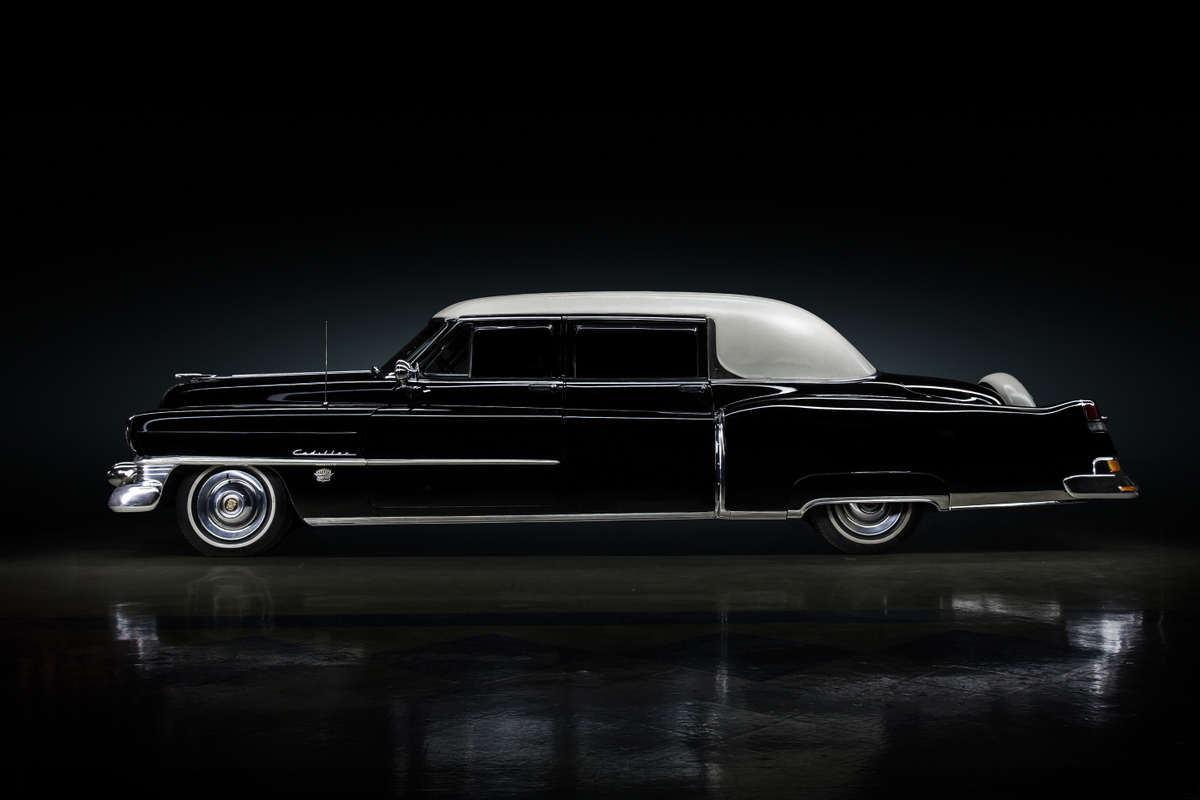 …The year was 1952, Cadillac’s 50th anniversary year. In preparation for the 1953 Paris Salon Show, Cadillac sent four chassis to Derham Body Company (Rosemont, PA) to be custom built to commemorate the anniversary. Commemorative styling included gold cast emblems and a through-the-bumper exhaust system, which tucked the tailpipes out of plain sight. 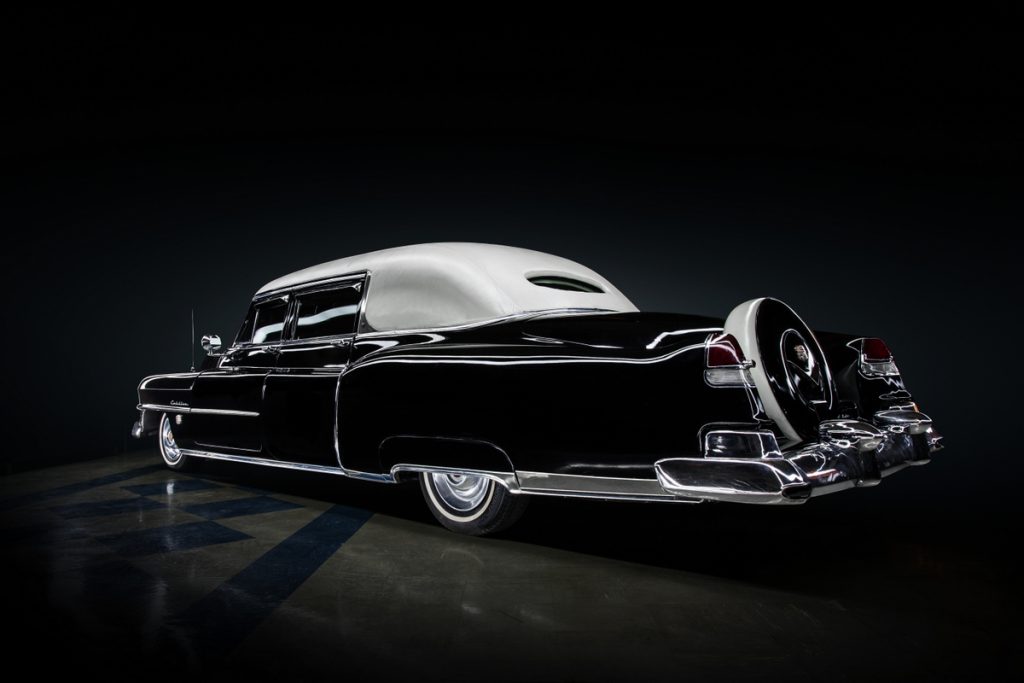 This particular Series 75, build completion date May 13th, 1952, was one of those four cars displayed at the 1953 Paris Salon show, as evidenced by the plaque incorporated into the dashboard. Here’s where things really get interesting. When we purchased the car, we had been told that it had ties to President Dwight D. Eisenhower, though we took that with a grain of salt. However, while digging around the interior we were met with a surprise; lost behind the glove box was a folded-up letter, dated October 19th, 1953, that read as follows: “The 1952 Cadillac Custom Sedan conveyed to you during the year past, from this state, was the vehicle specifically built to order and acquired for use in transporting a special visiting dignitary General of the Army Dwight D. Eisenhower, President of These United States of America.” Our jaws hit the floor. 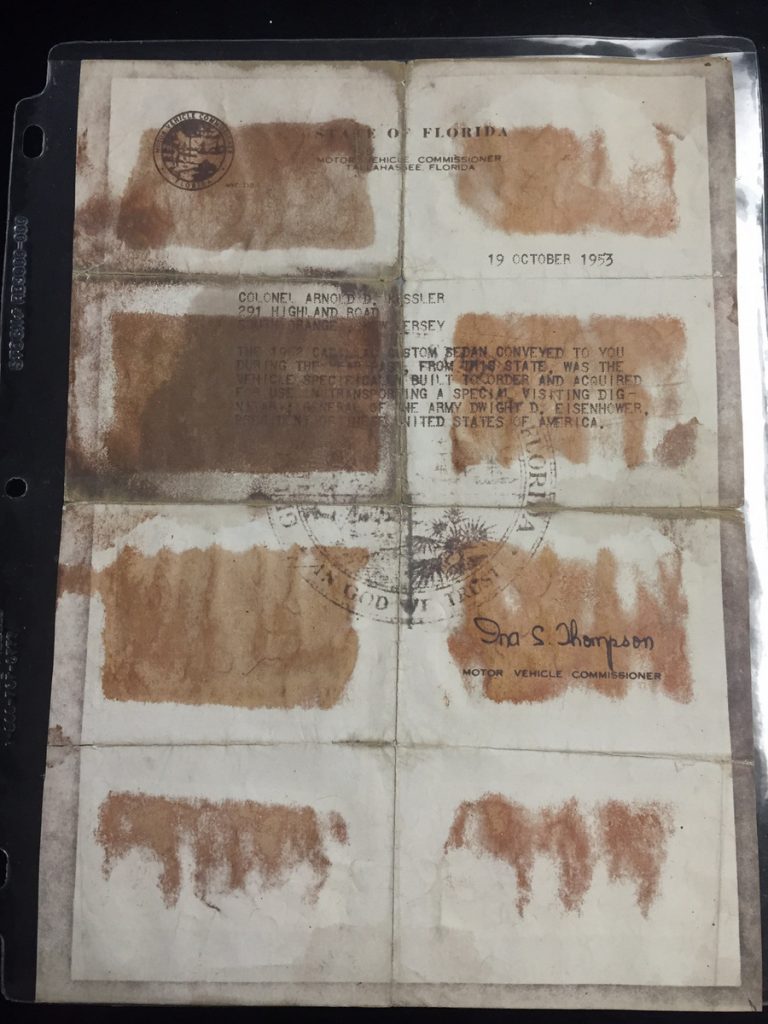 The letter, written by Colonel Arnold D. Kessler, was stamped and signed by Motor Vehicle Commissioner Ina S. Thompson. It was sent with the car when it was shipped from France back to the United States. Derham of Rosemont went on to build two more vehicles for President Eisenhower, both of which were armored presidential motorcade cars. While this car was not part of his armored motorcade, it was said to have been used personally by Dwight D. Eisenhower after he had announced that he would accept the call to serve as President, and was serving as First Supreme Commander of NATO.

The Cadillac Database has record of the car and notes the connection with Eisenhower. There is also an article on the car, published while in the previous owner’s hands, which provides some good background on the car. We went one step further and tracked down the owner who had the car titled in 1968; his family still resides in the same small town in Michigan and they confirmed the cars purported history. 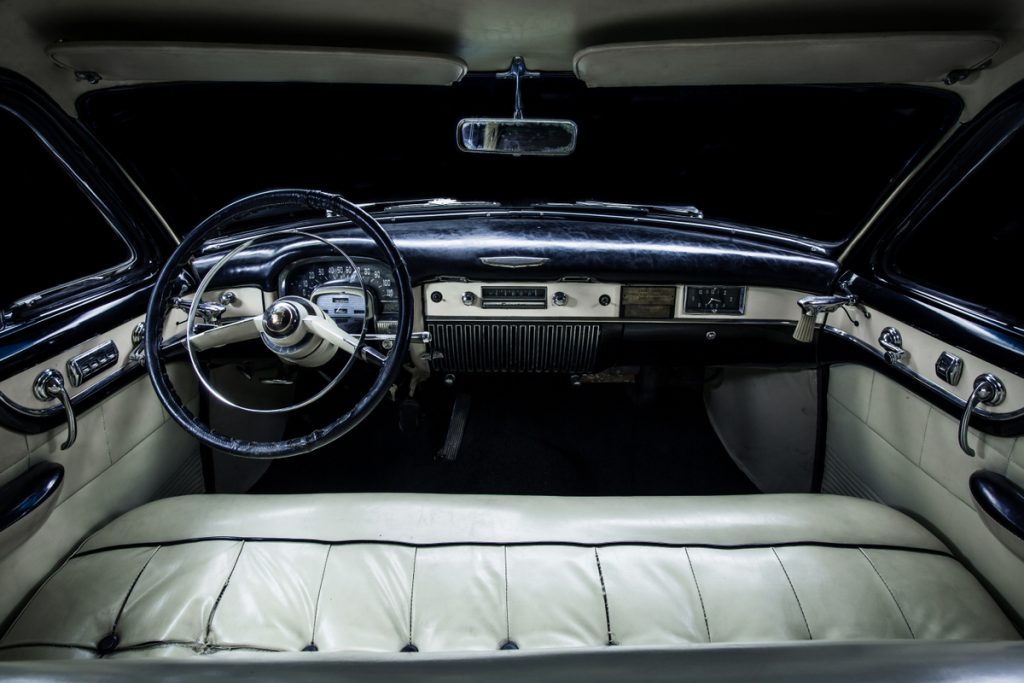 So, besides the seriously interesting ownership history of this gorgeous custom sedan, what makes this Derham limousine unique? Well let’s start with the fact that it’s a post-war Derham. Derham built very few cars after the war, like many of the smaller coach builders of the era. In addition, this Series 75 has a very unique and eloquent continental rear-end kit. The car is actually stretched to accommodate the rear deck and spare. The quarter panels and fins were extended to meet the decking and extend well beyond the normal endpoint of the rear deck lid. The lines down the side of the car are just stunning. We know of no other cars built this way, further evidence that this was a custom commemorative display car. All work done is seamless and looks absolutely outstanding. 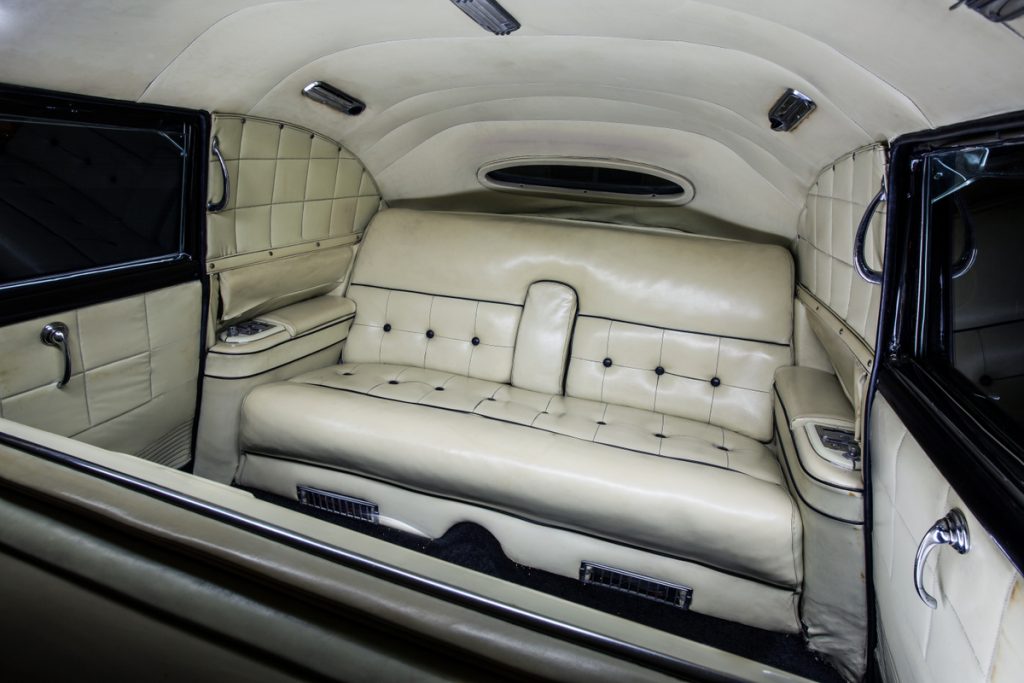 This car was built with “blind quarters”, meaning the rear side windows behind the back doors were deleted in the build, primarily for privacy reasons.  Another “privacy feature” was the smaller oval rear window.  The leather interior of this classic limousine survives in it’s original condition, and shows incredible patina.  The car is equipped with overhead duct air conditioning, unique to Derham.  Dual A/C units are intact in the trunk, as is the (Harley Davidson engine-like) over-sized compressor under the hood.  This coach actually also boasts a chilled freshwater drinking system; it’s pressurized and delivers fresh water all the way up to the glove compartment through a soda spout.

This is the only Series 75 limousine that we have come across with a continental rear end. With the rare exterior specifications, fantastic interior quirks, and ties to President Eisenhower, this Cadillac is one truly special vehicle.